Steve Walker: Flight Controller Readies Shuttle for First Flip
A decade in Mission Control for native Texan Steve Walker has seen him help steer the Space Shuttle to historic destinations. Among them were the Russian Mir Space Station, the Hubble Space Telescope and the International Space Station.

Today Walker is developing some unprecedented orbital gymnastics critical to safely returning the Shuttle to flight. 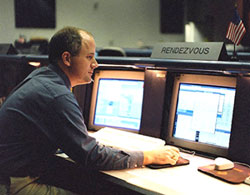 Walker and a team of specialists in rendezvous techniques have developed a nose-over-tail flip the Shuttle will perform when it approaches the Station on its return to flight mission, STS-114. The flip will allow cameras aboard the Station to survey the Shuttle's surfaces as one of many measures being put in place to check for damage to the spacecraft.

The flip is a first, and it has been a challenge for pilots and rendezvous specialists. For a brief period, it prevents the crew from seeing the Station they are approaching. Previously, the Shuttle has always flown with its windows facing the Station, affording the astronauts onboard the best possible view of their destination as they close in.

The flight technique, called the RBAR Pitch Maneuver, was designed by Walker and two other engineers at NASA, Mark Schrock and Jessica LoPresti.

"The unique thing is that we knew from the beginning we could do this maneuver," said Walker. "We already knew how to fly the Shuttle. It's flexible enough, since there's no new hardware, that we could fly this procedure next month."

Walker has been a lead Rendezvous Guidance and Procedures Officer for six past Shuttle flights, including the last three missions to service the Hubble Telescope.

As a rendezvous officer, Walker makes sure the Shuttle reaches its target, whether that is a satellite, the Hubble Telescope or the Station, and then docks properly. Walker started out working on trajectory design for the Shuttle, especially the close-range approaches the crew flies manually.

Walker holds bachelor's and master's degrees in aerospace engineering from Texas A&M. He spent a memorable summer traveling the length of Britain and studying English, history and geography.

Love led Walker to NASA, but it was not necessarily a love of space.

"When my future wife got a job in Mission Control in the Flight Activities Office, that clinched the deal," said Walker. He is now married to Cindy Walker and has three children. His 10 year-old daughter has aspirations of swimming in the Olympics. She and her sister and brother have had swim team practice five days a week and meets on Saturdays.

When the excitement of gently bringing together two spacecraft traveling at 17,500 mph is not enough, Walker finds adventure with the YMCA. He enjoys a campfire rendezvous with his children through the YMCA Adventure Guides. Other off-the-job activities include carpentry, a skill he says was discovered by his wife. Since then, he has been put to work gutting and remodeling the kitchen.

When he is in Mission Control and the Shuttle Discovery is beginning its flip closing in on the station, Walker won't have time to celebrate the accomplishment, he said.

"I'll be watching the Station very closely to make sure everything goes as planned," he explained. "Hopefully we'll get good pictures from the Station with the cameras. If it goes well, it'll feel really good that a small team of us worked together over a long period of time to make it successful."
› Back To Top