STS-114 Mission Specialist Steve Robinson: What a Wonderful World
He will see skies that are not blue and stars that do not twinkle. However, when Steve Robinson soars above the Earth as he returns to space on the next Shuttle, he will see the world from a vantage point few humans have ever seen.

The view from his window to the world matches no other.

"It's indescribable," Robinson said. "Flying at five miles a second in space, the view changes rapidly. You see a wide spectrum of color and light you don't see on Earth. It's a great place for an artist." 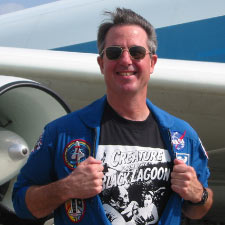 Robinson is an artist, musician, scientist and space explorer, whose fascination of the new – untried, untested and uncharted – has led him throughout his life. His love of flight stays close to his heart as he readies to fly back into space.

From paper planes to turboprops, Robinson as a young boy was curious about things that could fly. Books on airplanes and rockets stacked high on his shelves at home.

"I was fascinated with things that flew just about as soon as I could walk," he said. "I grew up just trying to make things fly and then trying to make myself fly."

Astronauts Al Shepard, Gus Grissom and John Glenn served as his heroes while his father, an engineer and inventor, was his guide.

"I can remember being really small and the earliest spaceflights were going on, wishing that I could do that," he said. "As I grew up there were lots of other things I wanted to do - I wanted to be a biologist and a musician and an artist - but I never stopped wanting to fly and wanting to fly into space."

A self-described awkward teen who liked and studied math soon became an aviator in his own right. Robinson began building and flying hang gliders.

At 13, he plucked aluminum pipes from a scrap metal yard and transformed a busted sprinkler system into his first flying machine - a hang glider with a 40-foot wingspan built from his own imagination. From a hilltop in California, Robinson launched his first flight.

After a flight lesson bought by his father as a gift, Robinson wanted more.

"I started mowing neighbors' lawns so I could earn enough money to fly again," he said. "At the time, my father didn't know what I was up to. I rode my bike 60 miles just to have that chance again."

His desire to fly even higher and see more of the world grew.

Following his dream, he came to NASA and completed two student co-op tours as he went to college to study his passion. 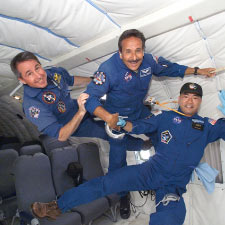 Robinson started work at NASA's Ames Research Center in 1979 as a research scientist in the fields of fluid dynamics and aerodynamics.

In 1990, he made a move from his home in California as well as within his career. He became Chief of the Experimental Flow Physics Branch at NASA's Langley Research Center in Hampton, Virginia, where he led a team of 35 engineers in fluid dynamic and aerodynamic research.

As an aviator, Robinson has logged more than 1,400 hours in various aircraft ranging from antique taildraggers to NASA jets.

After 16 years with NASA, he made yet another move, one that would give him the chance to fly what he describes as the "ultimate experience in flight," to fly into space. Selected as an astronaut, Robinson reported to the Johnson Space Center in 1995 to begin his official training.

Robinson met his dream of flying into space in 1997 as he flew onboard Shuttle mission STS-85. As mission specialist, he flew the shuttle robot arm and the experimental Japanese robot arm, and served as a backup to the spacewalk crew.

On his second flight, Robinson returned to space with his childhood hero John Glenn on STS-95.

"I learned more than his persona as an American icon and a senator and the first U.S. astronaut to orbit," Robinson said. "He's also a very accomplished aviator, a real gentleman and a scholar of the human condition."

Robinson now awaits a return to space with a renewed sense of spirit. He will return with the Shuttle, which has been grounded since the Columbia accident.

This mission not only will deliver supplies and science equipment to the International Space Station but will also test vehicle inspection and repair techniques in space that have never been done before. The 12-day mission aims to ensure safety for this flight and all future Shuttle flights.

Robinson acknowledges and accepts the risks involved in spaceflight as he also recognizes its importance.

"If you try to take the fragile human body from zero velocity relative to the surface of the Earth, accelerate it to 17,500 mph in the vacuum of space, and then reverse that process and bring it down, it is inherently dangerous," he explained. "It is, however, worth it because this is the human destiny."

Returning the Shuttle into space will advance exploration on numerous levels to discover the great beyond.

"That means going farther out in space, getting out farther away from the Earth," Robinson said. "Every step that we've ever taken in the space program has been a step closer to that destiny. STS-114 will be a fairly obvious step, but it'll just be one more step."