STS-114 Mission Specialist Soichi Noguchi: Teaming up to Return to Flight, Scout's Honor
As a Boy Scout, Soichi Noguchi learned the value of teamwork early in life. Those lessons prove even more valuable today as he prepares to return the next Shuttle to space with his fellow crewmembers – a team transcending national boundaries.

As America sent its first Space Shuttle into space, Noguchi, a teenager, watched on television from the opposite side of the globe. The successful feat inspired his future.

"I thought there's a new space age that's coming to us," he said, "and, the ordinary people, not just the top-notch pilot, but like engineers, doctors and scientists can fly."

Noguchi, an "ordinary" person with an extraordinary dream grew up in Chigasaki, a city of Kangawa, Japan that lies in the middle of Honshu Island. At the heart of his life-long dream was his strongest role model, his father. 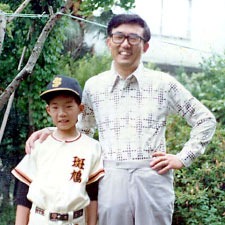 "My father is my hero," he said. "He was an engineer. He was a good educator, and he taught me a lot about science and also how to interact with nature and other folks."

His father's encouragement coupled with what he learned long ago on cooperation gave Noguchi a foundation on which to build his dream. Laying more groundwork, he pursued an education that would bring him closer to his goal.

He then joined Ishikawajima-Harima Heavy Industries Co., Ltd., where he worked on the design aspects of intricate aerodynamic components for vehicles intended for space flight.

Noguchi was selected in 1996 by the National Space Development Agency of Japan whose charter led the Japanese Development of Space Program. NASDA has since merged with the Institute of Space & Astronautic Science and National Aerospace Laboratory of Japan, forming one independent administrative institution: the Japan Aerospace Exploration Agency or JAXA.

Two months later, Noguchi flew overseas and reported to the Johnson Space Center in Houston. After two years of training and evaluation, he qualified for flight assignment as mission specialist.

In April 2001, Noguchi got a phone call from the Astronaut Office chief that would four years later recognize his dream of launching into space, just as he watched on television 20 years before.

"I was waiting for that phone call for four years," he said, "and learning that I would be flying... that was priceless."

Assigned to the crew of STS-114 who will soon fly Discovery back into space, Noguchi ties what he learned back from his days as a scout with today's critical training as the crew prepares to carry out its distinctive mission.

This mission, like others before it, will supply the International Space Station and prepare it for further assembly. However, it will also demonstrate a series of never-before-done vehicle inspection and repair techniques while in space before its return home to Earth. 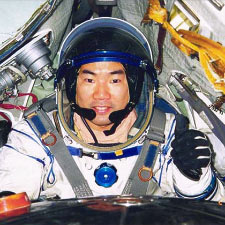 Teamwork, a thing Noguchi understands well, is at the forefront of this mission as its success will help ensure safety for this flight and future flights of the Shuttle fleet.

Not only will Noguchi fly into space as he once dreamed about, but he will also become the second Japanese astronaut ever to walk the void on three spacewalks. Along with STS-114 crewmate Steve Robinson, he will perform maintenance to the Station as well as demonstrate new critical tile repair techniques for the Shuttle.

Though Noguchi has dreamed many years of getting to space, he recognizes the long-term significance of human exploration that is accelerated with the Shuttle’s return.

"We are opening a new era," he said. "What we are doing now is to ensure that we have great access to space, which enhances our lives for sure."

Noguchi remains open to his wife and children as he explains the risks involved in spaceflight while he also reminds them of its importance on their future.

"The risk is there, but the return is still enormous," he said.

Every step made in space advances the universe on its journey of exploration. Today, humans continue to work and live in space for the benefit of the future. Returning the Shuttle to flight will take humans even further.

"Every mission is critical," Noguchi said. "Our mission actually opens the doors for all subsequent flights. If we don't make a successful flight, there may be no other flights following us, so in that sense, our mission is very critical to continue our journey to space."