Setting the Date: Teams Work to Select Shuttle Launch Windows
Wedding planners have got nothing on JSC’s Flight Design and Dynamics Division.

Sure, it’s hard to coordinate caterers, florists and musicians, but that’s nothing compared to the task of flight designers and flight dynamics officers -- literally making sure that the heavens are aligned for a Space Shuttle launch. It is their job to ensure that a launch window has the right combination of factors such as orbits, inclinations, planetary rotation and sunlight. 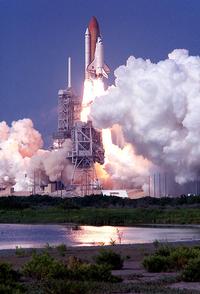 This is not a job for someone who slept through physics class.

Image to right: Space Shuttle Discovery lifts off in 2001 to begin the STS-105 mission. Credit: NASA

The initial launch date selection process is up to NASA Headquarters and the Shuttle and International Space Station Programs, said Steve Staas, STS-114 flight design manager with USA. After that, FDOs at JSC help in the final selection by looking at factors such as lighting and the “in-plane time.”

In-plane time refers to the point when the plane of the International Space Station’s orbit is over the Kennedy Space Center launch site. Launches must occur within five minutes of the in-plane time to assure a rendezvous with the Station.

Tracy said that “we can launch any day of the year” because the in-plane time occurs twice every day.

However, only one window per day is usable due to the inclination, or angle, of the Station’s orbit. The ascent trajectory must be headed from south to north for a Shuttle launch.

Along with in-plane time and inclination, lighting must be factored in.

Good lighting is crucial for observations of the Shuttle’s external tank during launch and ascent: experts on the ground need to keep tabs on the recent adjustments made to reduce foam debris. Many cameras, including the orbiter’s umbilical camera and the crew’s hand-held cameras, will be scrutinizing the tank. With that in mind, FDOs look for launch opportunities that will provide ample sunlight for a clear view.

But even the best planning can’t guarantee a sunny day. And unlike a wedding, rain isn’t considered good luck for a launch. That’s where Frank Brody and his team come in.

Brody is the chief of the National Weather Service Spaceflight Meteorology Group (SMG) at JSC. One of the group’s roles is to examine weather and climatology for launches and landings. 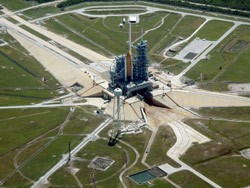 Image to left: Space Shuttle Discovery and its support stack of hardware sit at Launch Pad 39B. Multiple teams decide the best time for the Shuttle to launch from here and begin its mission. Credit: NASA

He said that during the 80s and much of the 90s, when most missions weren’t docking with a space station, climatology was a “prime factor” in selecting a launch window. Without the restriction of in-plane time to meet rendezvous requirements, experts were free to set a launch window during a summer morning if the mission’s science objectives allowed, knowing that thunderstorms are less likely in Florida that time of day.

Once rendezvous missions became the norm, however, and launch windows shrunk to five or 10 minutes per day, climatology could not play as large a role in window selection. But weather -- the actual, real-time conditions at launch and landing sites -- is still vitally important.

When it comes to evaluating launch day weather, Brody said that there are two sets of rules involved. One set is called the Launch Commit Criteria (LCC), monitored by weather experts, Air Force officials and launch controllers at KSC. The other set, the flight rules for an abort landing, are watched by SMG and JSC flight controllers to make sure that if the Shuttle had to make an emergency landing, the conditions would be safe to do so. This involves watching weather conditions not only at KSC, but also at possible landing sites in New Mexico, California, Spain and France.

“Basically, you can’t launch unless you can land,” Brody said. For each possible landing site, his team monitors conditions like cloud ceiling height, visibility, cross-wind speed and location of nearby thunderstorms.

It is possible that the LCC guidelines indicate a “go” for launch while the abort landing flight rules say “no go,” and vice versa, but the decision to launch lies with the flight director, launch director and ultimately with Deputy Shuttle Program Manager Wayne Hale, who chairs the Mission Management Team.

Even after in-plane time, orbit inclination, lighting and weather have been coordinated as well as possible, a launch could still be postponed due to a hardware problem or a number of other factors. In that case, the big event is bumped to the next available window. The process continues until the conditions are right and the launch is as safe as it can be.

All the effort is worth it when a Shuttle lifts off the pad, said Tracy.

“I have a front-row seat to the best show in the world,” he said.