This Isn't Your Father's Moon Buggy 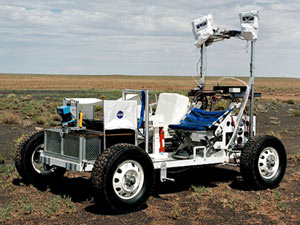 It's probably the ultimate in concept cars.

Image to right: A 1-G Lunar Rover Vehicle is in its element during testing at Meteor Crater, Ariz.
+ View more images

The styling of this year's version isn't at all sleek, it's an absolute non-starter on the drag strip and range is only about six miles. But subsequent models seem likely to go places nothing on four wheels has been before and once there, to do some pretty remarkable things.

The vehicle is the SCOUT, an acronym for NASA's Science Crew Operations and Utility Testbed project. The project is aimed at developing "smart" rovers for use on the Moon, Mars and perhaps beyond.

Lunar rovers were used on three Apollo missions. SCOUT is the beginning of a new generation of multiuse vehicles, to help with much longer exploration and development missions.

Such rovers, driven by astronauts, will be able to carry equipment and supplies. They also will respond to oral commands and hand signals. The current SCOUT can be operated by wireless remote control and do some tasks autonomously -- essentially on autopilot. Eventually they will work cooperatively not only with humans but also with other robots now under development. 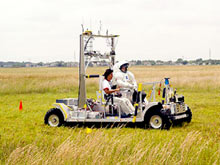 Image to left: The rover undergoes testing in a grassy field at Johnson Space Center.

"The rover performed exceptionally well during all modes of operation," said Project Manager Frank Delgado of JSC's Engineering Automation, Robotics and Simulation Division. Information from the tests will help develop a more robust rover with even greater capabilities, he said.

Improvements could include new ideas in intelligent software, crew accommodations, power, communications and in-situ processing.
› Back To Top