Test Drive: Shuttle Training Aircraft Preps Astronauts for Landing
How do you help astronauts feel like they've landed the Space Shuttle hundreds of times without actually using a Shuttle?

That is one task given to research pilots at Johnson Space Center in Houston. They take the sleek Shuttle Training Aircraft (STA) and use it to train astronauts to land the massive-by-comparison Space Shuttle. 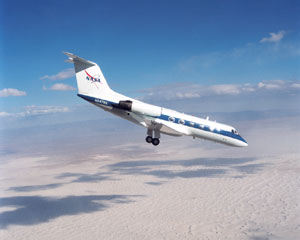 Image to right: The Shuttle Training Aircraft is used to train astronauts to land the Space Shuttle. Credit: NASA

"Astronauts only get one try to land the Shuttle; it lands as a glider," said Research Pilot Triple Nickel. "We use the very slick, sports car-like feel of the STA to simulate the 'falling brick' of the Space Shuttle."

According to astronauts who have flown both, the STA gives a remarkably good simulation of a landing Shuttle.

"The STA is great! It flies very closely to the actual orbiter," said STS-114 Commander Eileen Collins. "The handling qualities are close enough that we have no problems transitioning from training to the real thing."

The STA is a "highly modified Gulfstream-2 aircraft," Nickel said. The plane’s cockpit has been adapted to closely resemble a Shuttle's flight deck; the left-hand seat features the same hand controls that a Shuttle commander uses during a mission. Several passenger seats in the back of the aircraft have been replaced by a bank of Shuttle-simulating computers.

"When a pilot flies the aircraft, he's actually flying a computer model of the Shuttle," Nickel said. NASA has four of these customized aircraft, most of which are kept at the NASA Forward Operating Location in El Paso, Texas. The fleet is rotated through Ellington Field for maintenance as needed.

Most of the STA training takes place at the White Sands Space Harbor, a part of the White Sands Test Facility in New Mexico. The location is ideal because it not only has an actual Shuttle landing strip -- an STA training requirement -- but it provides more remote, undisturbed airspace than its counterparts at Kennedy Space Center and at Edwards Air Force Base in California.

Astronauts are shuttled to El Paso on another NASA training aircraft, the T-38. Each STA training session includes 10 approaches and landings. After a session, the training crew refuels the aircraft, picks up a different astronaut and begins again. 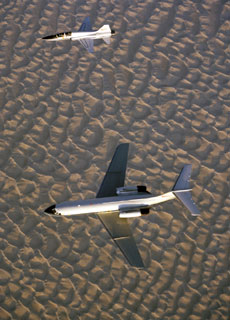 Image to left: The Shuttle Training Aircraft flies over the desert accompanied by a T-38 aircraft. Credit: NASA

"STA training is all about producing a familiar path through the sky for the astronauts," Nickel said. "No matter the height of the astronaut, we put their eyes at a consistent height so when they fly the Shuttle, the view looks familiar. We even mask off the windows to match the view from a Shuttle."

The STA flies at the same speeds, dive angle and approach trajectory as the Shuttle. But simulating that "falling brick" feeling is a delicate maneuver.

"To accomplish that, we lower the main gear of the STA and put the engines in reverse thrust," he said. "You know when a commercial plane lands and you're thrown forward after the wheels touch down? We do that at 30,000 feet."

Prior to a Shuttle mission, a commander has to complete 1,000 STA landings. The STS-114 commander and pilot, Eileen Collins and Jim Kelly, will continue STA training on a weekly basis until launch. Such thorough practice leads to confident astronauts and successful Shuttle landings -- not to mention great feedback for the STA teams.

"Shuttle astronauts come back and tell us it felt like they had done it a thousand times before," Nickel said.

"It is some of the best training we have," Collins said.
› Back To Top