The Real Deal: Crewmembers Get Their Hands on Flight Hardware in Florida
There’s nothing quite like the real thing.

That sentiment could be applied to many things -- love, happiness, fat-free cheese. But for a Space Shuttle crew, it is especially true of spaceflight hardware.

The Return to Flight crew of STS-114 traveled to Kennedy Space Center (KSC) last week to examine the Shuttle Discovery and to train with the actual equipment they will use in flight. This hands-on preflight exercise is called the Crew Equipment Interface Test (CEIT). 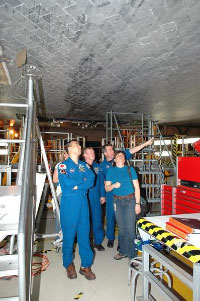 “From cable routing to tool stowage to tile inspection, the CEIT makes us better prepared to carry out our mission,” said STS-114 Commander Eileen Collins. "This test brings us one step closer to rolling the orbiter to the Vehicle Assembly Building for stacking, thus one step closer to launch."

Each Shuttle crew is already very familiar with the vehicle and its equipment, thanks to the high-fidelity mockups, tools and other hardware training mechanisms at Johnson Space Center. But there is no substitute for the actual 4.5 million-pound vehicle that will carry them into orbit.

"The orbiter is obviously the highest-fidelity training you can get," said Robert Hanley with United Space Alliance (USA). Hanley is the STS-114 Mission Lead for the Vehicle Integration Test Office (VITO), which plans and implements the CEIT. "It’s important that the first time the crew sees their vehicle is not launch day."

The CEIT is an all-day event months in the making. Since it would be impossible for the test to include every piece of hardware on the Shuttle, a list of CEIT requirements must be narrowed down to the final agenda -- a process that takes about eight weeks and involves many offices and teams.

"A CEIT involves multiple organizations and a great deal of people," Hanley said. "The VITO brings all those together so the test comes off well. It’s almost like a launch countdown by the time we get finished."

In order for a piece of hardware to be a part of the CEIT, it must fall into one of three categories: equipment never used with a specific orbiter before, equipment for which mockup training is not sufficient, or equipment relating to a spacewalk. VITO Orbiter Engineer Kevin Regula with USA explained that last week’s STS-114 CEIT actually lasted two days since there are several new modifications to the orbiter as well as return to flight requirements. 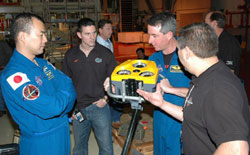 Image to right: STS-114 Mission Specialists Soichi Noguchi and Stephen Robinson look at a camera that will be used on the mission. Credit: NASA

The agenda included inspections of electrical systems, data cables, the airlock, windows and more. The mission’s spacewalkers, Soichi Noguchi and Stephen Robinson, checked out everything they will need for their three planned excursions -- from handrails and cameras to the new Orbiter Boom Sensor System. The entire crew inspected Discovery’s tiles and Reinforced Carbon-Carbon panels as well.

A separate Payload CEIT is also conducted to allow the crew to perform spacewalk tasks on the actual payload hardware and to examine the elements that are going to be in the Shuttle’s payload bay during the mission. For STS-114, that includes the External Stowage Platform that Noguchi and Robinson will install, as well as the Multi-Purpose Logistics Module (MPLM) and the Lightweight Multi-Purpose Experiment Support Structure (MPESS) Carrier (LMC) that will carry the replacement Control Moment Gyroscope (CMG).

Crew suggestions are a vital part of a CEIT. After seeing and working with a piece of flight hardware, crewmembers may suggest a different method for using that equipment, or they may find a hardware problem that needs repair or modification. Any items like these, called "crew squawks," are documented, researched and implemented as needed. Crew squawks are valuable feedback for training teams, hardware engineers and the VITO.

In addition to planning CEITs, the VITO bridges any gaps between engineering and training teams to help vehicle preparation go smoothly. The team serves as the "eyes and ears of the crew since they can't be everywhere for themselves," said VITO Chief and Astronaut Jerry Ross. "In many ways, we're the caulking that goes in between the other organizations to make them all fit together better."

While the work can be quite technical, Hanley said that his favorite part of his job is the personal interaction.

"I love spaceflight hardware, but I think I enjoy the people more than anything else," he said. He and his VITO colleagues said that they are enjoying their role in returning the Shuttle to flight.

"We want to continue. That’s what man is here for," Regula said. "We lost seven good friends on that day and we want to honor them by continuing to explore."

Kleba agreed. "If you stumble, you don’t stop walking," she said. "Just because we took a break doesn't mean we stop exploring."