NASA Begins Rehearsals for Return to Flight
Simulating a first-of-its-kind somersault that will expose the underside of the Space Shuttle for tile inspection, NASA has begun rehearsing its Return To Flight.

The rehearsals were the first of 10 to 15 full-scale dry runs that will continue until just days before launch. The exercises will allow the team to practice not only the new nose-over-tail flip of the Shuttle but also docking, launch, spacewalk and landing events. 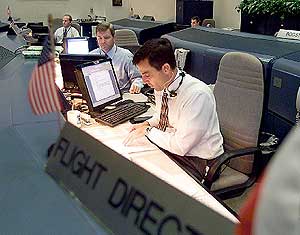 "This is where we stop just brainstorming and thinking about how we're going to go fly this flight in space," said Paul Hill, lead flight director for Shuttle Mission STS-114, the first Shuttle flight since the Columbia accident.

"This will look and feel to us just like a real flight -- even to the astronauts," Hill said. "Once the clock starts ticking in the simulation, we get the same adrenalin when something bad starts to happen. We get the same rush when we solve a problem that keeps the crew out of danger as we would during the real thing."

A web of computer and voice communication joins dozens of flight controllers, the astronauts who will fly the Shuttle, support engineers and training instructors to simulate key portions of the next mission, as well as their responses to possible failures.

Flight controllers supporting both the Space Shuttle and International Space Station will work in the Mission Control Center. Hill is leading the Shuttle contingent, while Mark Ferring is lead flight director for the Station team.

The crew of the Return To Flight mission participates from either stationary or moving Shuttle simulators. The seven-member STS-114 crew is commanded by Eileen Collins, who in July 1999 became the first woman to command a Shuttle mission.

The rehearsals integrate every aspect of and participant in the flight, including a stand-in Station crew that will participate from the nearby Space Station simulator. Each session mimics part of an actual flight, with planners inserting problems during each practice session and gauging the performance of the team as it works to fix them.

These trials will prepare and prove the team's ability to control "not just the nominal flight but even any emergency that comes up," Hill said.

The first full-scale flight rehearsal on Oct. 13 focused on the Space Shuttle Discovery's rendezvous and docking with the International Space Station. That simulation included practicing the flip the Shuttle will perform as it approaches to allow Station crewmembers to photograph its heat-shielding tiles to check their condition.

The second, on Oct. 20, focused on inspections of the Shuttle's thermal protection tiles and wing leading edges using Discovery's robotic arm and a 50-foot extension with a camera and laser imaging system.

About 200 hours of the complex simulations are planned. Some, including launch and landing, will be rehearsed many times.

"This integrated simulation is a huge milestone for the crew," Collins said. "The crew is ready to go, the flight control team is ready to go, and we're especially looking forward to the rendezvous pitch maneuver -- something that's never been done before."
› Back To Top