They are all dreams, some realized and some still pursued, of Dickinson, Texas, native Jennifer Hagin. She is a flight controller who will oversee the Space Shuttle's critical onboard flight computer systems when it returns to flight. 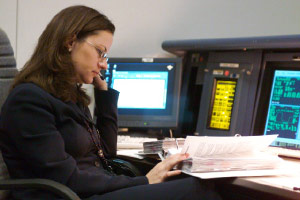 Image at right: Jennifer Hagin is at work inside Mission Control.

Hagin has degrees in both English and engineering, fields often not complementary as anyone who has read an engineering manual can testify. But the combination came naturally for Hagin, a Data Processing Systems engineer in Mission Control.

Hagin, whose B.A. in English is from Trinity University in San Antonio, Texas, never thought she’d work at the Johnson Space Center, even though in her hometown near Houston being employed by NASA was common. In fact, famous Apollo Flight Director Gene Kranz lived three doors down from Hagin when she was a child.

"He was the tough Marine who said, 'Kids, go home,' and we went home, fast," said Hagin.

While she was an English major, Hagin also took engineering classes at Trinity. After getting her bachelor’s degree, Hagin began graduate work in education. But she missed engineering, and she went on to earn a second bachelor’s in electrical engineering from Texas A&M. During her last six months at A&M, she worked on a simulator for the Space Station, work that led her to a job with a NASA contractor.

Mission Control and the Johnson Space Center remind Hagin of her small-town roots; it’s like the support her neighborhood provided, she said.

"The neighborhood would get together after a hurricane hit and clear debris and felled trees (and an occasional snake in the living room). Even the children would pitch in wherever needed to clean up," Hagin said.

She feels NASA pulls together when faced with adversity in the same way. In keeping with that spirit, Hagin makes it a point to mentor new employees. She enjoys seeing their natural talent take root, and tries to teach them that this is no average job.

"I'm constantly amazed by the people here and the sacrifices they make," said Hagin. "The International Space Station control teams are here 24 hours a day, seven days a week, 365 days a year. There's so much shift work involved. I know a lot of plane tickets have gone unused when vacations were canceled.

"The Shuttle team is also working harder than ever to prepare for a safe return to flight. Although it’s unnoticed by many, a lot of Mission Control is just quietly taking care of business," she said.

In Mission Control, you have to be able to understand the technical aspects, but also be able to work with a team and solve problems, Hagin said. You change from being an engineer to becoming part of a team of flight controllers, she explained. That teamwork is what can help a crew if there are problems.

For the next Shuttle flight, part of Hagin’s focus is on the International Space Station Contingency Shuttle Crew Support. That plan is a scenario that could be called into play in the unlikely event a Shuttle were unable to return safely to Earth.

It would be used as a last resort to allow Shuttle crew members to stay aboard the Station to await rescue. Hagin is developing procedures to be used in case the Shuttle must be undocked from the Station without a crew. Her work includes ensuring that commands could be sent from Mission Control to remotely deorbit the Shuttle.

While she still thinks about writing children’s books, Hagin relishes her work in Mission Control. "We're ready for anything we can fix," Hagin said. "Failures in flight are so little compared to the problems we get in simulations. We’re well trained."

Her favorite parts of the job are launches and landings, because they’re fast. Even after 18 missions, she said she still looks forward to climbing out of bed in the middle of the night to work a 3 a.m. Shuttle launch attempt for days in a row.

Hagin's enthusiasm has not dampened, even though she was working in Mission Control during STS-107, Columbia's final mission.

"The family members of the Columbia crew want us to keep flying," she said. "We don’t just quit because we had problems. We need to fix the problems and go do what we do best — fly."
› Back To Top