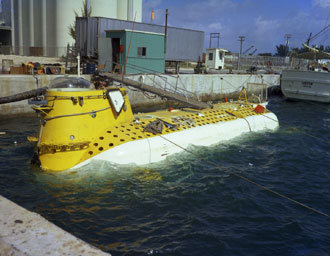 In mid-July of 1969 the whole world was focused on NASA's Apollo 11 moon landing. But some people at NASA were focused on something else.

On July 14, just two days before the Apollo launch, the PX-15 deep sea submarine Ben Franklin was towed to the high-velocity center of the Gulf Stream off the coast of Palm Beach, Florida. With NASA observer Chester "Chet" May on board, the sub descended to 1,000 feet off of Riviera Beach, Florida and drifted 1,400 miles north with the current for more than four weeks, reemerging near Maine.

In addition to studying the warm water current which flows northeast off the U.S. East Coast, the sub also made space exploration history by studying the behavior of aquanauts in a sealed, self-contained, self-sufficient capsule for NASA. The mission is the focus of a program airing on the Science Channel.

During the course of the dive, NASA conducted exhaustive analyses of virtually every aspect of onboard life. They measured sleep quality and patterns, sense of humor and behavioral shifts, physical reflexes, and the effects of a long-term routine on the crew. The submarine's record-shattering dive influenced the design of Apollo and Skylab missions and continued to guide NASA scientists as they devised future manned space-flight missions.

Today, NASA continues the underwater tradition with the NASA Extreme Environment Mission Operations program -- known by its acronym "NEEMO." Today's aquanauts are studying equipment and procedures that could prove useful as NASA pursues the new Vision for Space Exploration.

Named for the American patriot and inventor who was one of the first to chart the Stream, the 50-foot Ben Franklin was built between 1966 and 1968 in Switzerland for deep-ocean explorer Jacques Piccard and the Grumman Aircraft Engineering Corporation. It has been restored and now resides in the Vancouver Maritime Museum in Vancouver, Canada.