Paul Hill: From Florida Rooftop to Mission Control
When the Space Shuttle returns to flight, Paul Hill will be leading Mission Control from a center seat, a long way from the cold, dark lawn chair atop his grandfather's roof where he watched men leave for the moon as a child. 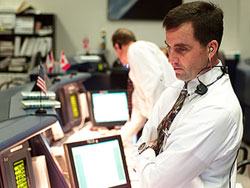 Hill, a Texas A&M alumnus, spent his early years in Titusville, Fla., across the Indian River from the Kennedy Space Center, where his father worked. He is now the lead flight director for the Space Shuttle's return to flight after the Columbia accident, Shuttle mission STS-114.

"I still remember sitting on the roof in the middle of the night. The next thing I know the whole sky lights up, and the house is shaking, and the Saturn V is blasting off out of the Cape," Hill said. "Working for NASA was in the blood."

His father joined NASA in 1959 at the Marshall Space Flight Center in Huntsville, Ala. He worked on Jupiter launch pads and every human space program through the Shuttle.

Hill's journey from that rooftop to Mission Control took him first to the Air Force. He earned bachelor's and master's degrees in aerospace engineering from Texas A&M on an Air Force scholarship. For the next four years, Hill worked on space command satellites for the Air Force. There he developed many of the skills he uses as a NASA flight director, giving him a lot of responsibility while very young, he said.

Hill came to NASA in 1990, working for a contractor planning the Space Station Freedom, which evolved into the International Space Station. His job included leading the development of the Station's assembly operations and writing many of the initial activation procedures. 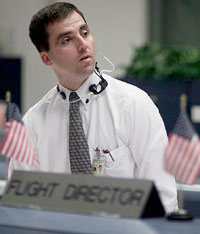 After only six years at NASA, he was selected as a flight director, and has led Mission Control for 23 Shuttle and Space Station missions. But a flight director's job extends far beyond the control center and begins long before a flight.

"The lead flight director's real job is preparing the team for whatever the new mission is," Hill said. The pressure and challenges of the job are among his favorite elements.

After the Columbia accident, Hill led a team developing new tools and methods to repair the Shuttle's heat protection tiles, efforts to be tested on STS-114.

"Flying the Shuttle is a really dangerous business," Hill said. "But that is not a bad thing. That doesn't mean we should stop flying in space. You can make some changes to make parts of this dangerous endeavor safer, but in the end it's still dangerous."

The important thing is to understand the risks, he said. "I'm a big believer in man as an explorer. We need a horizon to reach for, and space is that next horizon."

The next step is to finish assembly of the Station, using the Shuttle. "If the goal now is to explore, to return to the moon and travel on to Mars, we have to know more about building and maintaining spaceships that do not land in a couple of weeks for technicians to repair," Hill said. "Finishing the Space Station gives us more experience to apply toward building outposts and it gives us a place to learn more about space in the long haul."

Hill spends his time away from work with his two daughters and his wife. He enjoys skiing and traveling with his family. "We always have at least one trip in the planning stages for the upcoming year, and we're trying to see as many of the interesting places across our country as we can," he said.

Hill's daughters stay busy with school and sports, and, like their father, play soccer. He has coached his daughters' soccer teams for eight years. "I would have given my right arm to play professional soccer," he said.

One of the major components of soccer, teamwork, is also one of the most satisfying aspects of his work at NASA. "My job is a regular reminder of how good the folks are here. When ... you start working with folks from across many different areas on a new problem like Thermal Protection System inspection and repair, in a few months we go from it being something that you thought was impossible to now it's just kind of hard," he said. "Now that's a rewarding thing -- that you were part of a team that changed something from being impossible to something that we know how to do."
› Back To Top