Zero-Gravity Plane on Final Flight
It's had an up-and-down career. But even the most high-flying adventures have to end sometime. 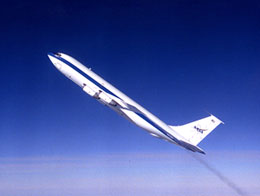 Image to right: NASA's KC-135A aircraft ascends at a steep angle as it flies over the Gulf of Mexico.

The latest of NASA's KC-135A aircraft, dubbed the Vomit Comet by the press, made its final microgravity flight Oct. 29 and will be retired at NASA's Johnson Space Center Oct. 31. This plane has been flying reduced gravity missions since 1994.

Some of the astronauts, engineers testing equipment, scientists and students flying experiments remember it more fondly than others. That's because about one in three first-time fliers gets airsick on the plane as it does its roller-coaster-like maneuvers over the Gulf of Mexico.

On the positive side, "The experience was amazing, and I wouldn't trade it for the world," a Rochester Institute of Technology student said. "I learned an incredible amount about engineering in the real world."

John Yaniec, the program's lead test director, said the KC-135A is still going strong. But it is the only one of its kind still flying, and it is becoming increasingly difficult and expensive to maintain the plane.

The roller-coaster maneuvers are called parabolas, because of their geometric shape. Each gives people and equipment aboard about 25 seconds of weightlessness. The maneuvers are carefully choreographed -- up at a 45-degree angle, "over the top" and then down at 45 degrees. Each flight does 40 to 60 parabolas. 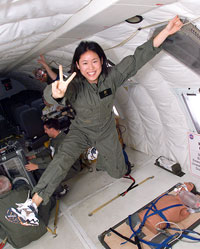 Image to left: A student experiences a moment of weightlessness aboard the KC-135A.

Other maneuvers offer gravity equal to that on the surface of the moon, 17 percent that of Earth, or of Mars, 38 percent that of Earth. The Reduced Gravity Program was begun by the Air Force in 1957 to train people, develop procedures and test hardware in weightlessness. It has been operated by NASA since 1973. More than 140,000 parabolas have been flown in a series of eight planes since the program began.

The KC-135A is part of a family of military planes descended from the Boeing 707 four-engine jet aircraft. The KC-135A began life as a tanker. This will be the last of the KC-135As to be used in the Reduced Gravity Program. It is to be replaced by a Navy C-9, a twin-jet variant of the McDonnell Douglas DC-9.

Astronaut candidates are required to fly in the microgravity program as part of their training. Engineers test equipment and procedures designed for spaceflight. Scientists do basic research on board. Some scenes from the movie "Apollo 13" were filmed on a NASA KC-135A. The plane typically flies four days a week.

Since 1995, college students have been able to participate in the NASA Reduced Gravity Student Flight Opportunities Program. They design experiments for microgravity and apply to take part in the program. The experiment of each student team selected is subjected to a rigorous safety inspection before it is flown.

Student experiments are flown twice, each time with two members of the four-member student teams. Journalists sometimes fly with the student teams to cover their activities.

More than 2,000 students have flown on the KC-135A. Their experiments have included physical and biological investigations as well as engineering experiments. Yaniec, who himself has flown almost 31,000 parabolas without a hint of airsickness, said he has enjoyed seeing the excitement on the students' faces while they conduct their experiments.

He said the program "helps pave the way for students to conduct cutting-edge research experiments" that may help lead some of them toward making major contributions to human knowledge and capabilities. The program is important in NASA's efforts to inspire the next generation of explorers.

This KC-135A is the eighth in a series of planes used in the Reduced Gravity Program. The first three planes, used from 1957 to 1967, were C-131s, twin-engine propeller planes that were military versions of the Convair 240-440 commercial airliners. Five KC-135s followed, the last two operated by NASA.

The C-9 aircraft will make its debut at the end of January or the beginning of February. The C-9 is primarily a Navy transport and is used by the Air Force as a medical evacuation plane.
› Back To Top