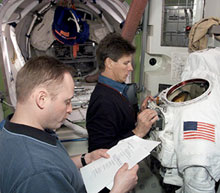 Expedition 9 Flight Engineer Mike Fincke got his first space assignment just a few weeks after President Bush announced the Vision for Space Exploration. So it's not surprising that the future of human space flight would be on Fincke's mind as he prepares for his upcoming flight.

In a recent interview, Fincke talked about the International Space Station's role in the Vision for Space Exploration.

"Going back to the moon, going off to Mars -- how exciting!" he said. "And the International Space Station is a perfect stepping-stone for us to perfect the technology, to perfect the operational tempo ... that we need in order to make those long-duration missions successful."

Fincke and his crewmate -- Expedition 9 Commander Gennady Padalka of Russia's Federal Space Agency -- are scheduled to launch in April for a six-month mission aboard the Space Station.

"Our food will be shipped up to us, and some water and some air, and the rest of it is up to the systems on board to take care of us and so that we can live in space away from the comforts of Earth for such a long time," Fincke said. "That's the kind of experience that we need ... so that we can have bases on the moon and beyond."

Focusing on the Future 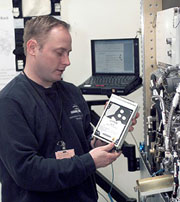 Image right: Expedition 9 Flight Engineer Mike Fincke practices using the hardware for the EXPRESS Physics Colloids in Space experiment. He is working in a mockup of the International Space Station's Destiny Laboratory.

As part of a two-person crew, Fincke will wear several hats while living aboard the Station. As the flight engineer, he will be responsible for managing, maintaining and repairing Station systems. He is also the NASA ISS science officer, a role that gives him a chance to prepare for future moon and Mars missions.

"When I received this assignment," he said, "I immediately went and asked what the science program was going to be, and I was amazed how many experiments we have ... There is a lot of science happening.

"One of the experiments [deals with] the effect of radiation that we experience in space ... What is the effect on the human cells and our basic fundamental genetic material? It sounds scary, but actually it's something that we're looking into to see the effects of long-duration space flight on people."

Another effect of long-duration flight on the human body is bone loss, a condition similar to osteoporosis. In addition to a rigorous exercise regimen, Expedition 9 will experiment with a medicine that might counteract the effects of bone loss.

"This is important for people who are going to be flying to Mars, and, if it takes three years, to understand the phenomenon and how to counteract it."

He credits NASA mission planners with making the most of a two-person crew: "We would like to have more people aboard the International Space Station, but the two people can do a good job, and there are a lot of people on the ground at the Mission Control Center and also in our Payload Operations Center.

"They're working very diligently on the schedules to make sure that we have time to not just eat and breathe and work aboard the International Space Station, but also to do our primary mission, and that's to look forward to the next step of going to the moon and Mars.

"And that means we need to do our science and do our payloads and make sure it's done right."

Crawling Around on the Outside

The high points of the mission for Fincke may come in the form of two scheduled spacewalks.

"Only recently did I actually start to think how really exciting that is, to be alone in the cosmos without a spacecraft around me, except for this suit that was put together by human hands. It's made out of material and a little bit of metal and a lot of plastic, and yet we'll be able to look out there on our planet below and the stars in the sky and really experience a true space flight.