STS-114 Commander Eileen Collins: From 'Soaring Capital of America' to the Space Shuttle
The next Space Shuttle Commander, Eileen Collins, prepares to take an unprecedented flight far from the skies that overlook the lush river valley nestled below Harris Hill in upstate New York where she once only dreamed of soaring high. 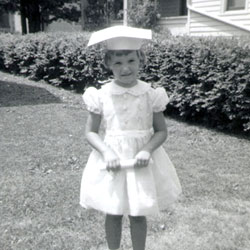 Image to left: Eileen Collins is pictured here at her kindergarten graduation from the Hoffman School (now closed) in Elmira, New York, circa 1962. Credit: Family photo/NASA

As a child, Collins had fantasized about flight for as long as she can remember. It was at summer camp one year in Elmira, NY as she gazed upward at the nearby sailplanes taking off and overriding the blue, when she determined that her dream to fly would one day become her reality.

Elmira, dubbed the 'soaring capital of America,' is known for its rich history in flight and collection of period planes, dating from the late 1890s to the late 20th century.

"My family never had the money to pay for flying lessons or…even a ride in an airplane," she said. "My desire to fly just continued to build."

Collins turned to books on vintage gliders built by the winged Wright brothers to fighter planes in Vietnam, World War I and II, which fueled her aviation passion but also sharpened her knowledge of flight. At age 16, she began working and saving her earnings, which would – three years later – help establish her piloting future. "I had saved up $1,000, and I took that to my local airport, at age 19," Collins said. "I asked them to teach me how to fly."

Although shy and timid, she pursued flight training and dismissed the premise that flying "was a guy thing" at the time. Collins began military pilot training for the Air Force in 1978, the same year that NASA opened the Shuttle program to women.

The elite first class of women pilots who joined the ranks of NASA's Mission Specialist Astronauts inspired Collins to dream bigger. She knew then that her natural love of history, astronomy and geology coupled with her devotion to flight made America's space program the perfect fit for a would-be astronaut such as herself.

More than the desire to soar the skies, though, challenge is what charges Collins' drive most. 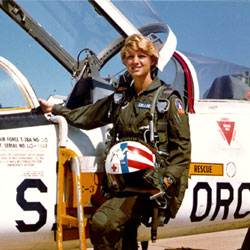 Image to left: Eileen Collins at her U.S. Air Force graduation in September 1979 at Vance Air Force Base in Enid, Okla. The aircraft is a T-38. Credit: NASA

Casting new light on the term 'frequent flyer,' she has logged more than 6,280 hours in 30 different types of aircraft. More than 537 of those hours were logged in space.

A veteran of three spaceflights, she became the first woman pilot of a Space Shuttle on the first flight of the joint Russian-American Shuttle-Mir program, and later the first woman to command a Shuttle mission.

Today, Collins and the entire crew of STS-114 are busy training and preparing for the one-of-its-kind flight. This mission does not only set it apart from others being the first flight since Columbia, but it also adds a new level of complexity.

STS-114's objective on its Return to Flight mission is two-fold. It will deliver supplies and science equipment and prepare the International Space Station for future building as well as pioneer new ways to protect future orbiters and their crews. 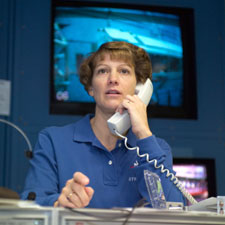 "I have a fantastic crew," Collins said. "The seven Shuttle crewmembers have been so professional in the work that we have done up to this point."

By returning the Shuttle fleet to flight, NASA will take a monumental step toward future exploration. Discovery and her crew will lead the way.

"We're a nation of explorers," Collins said. "We are the kind of people who want to go out and learn new things, and I would say take risks, but take calculated risks that are studied and understood."

Flying to new heights in exploration is a step-by-step progress.

"It's been a hundred years since the first flight of an airplane," Collins said, "and look how far we've come."

Returning to flight not only reflects the intellect, tenacity and courage of space pioneers of the past but will foster new knowledge today and tomorrow.