It Isn't Mars, but It'll Do for Now
Mars and the Moon can be tough on spacesuits. So can Arizona's high desert, and it's a lot easier to get to.

That's why a NASA-led team is at sites near Flagstaff, Ariz., this month to try out equipment -- spacesuits, rovers and science gear. The tests could help America pursue the Vision for Space Exploration to return to the Moon and travel to Mars. 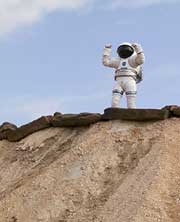 Image to right: Only those with access to the communications system in Dean Eppler's helmet know for sure. But if one had to guess what he might be saying as he stands atop a hill in Johnson Space Center's EVA Remote Field Demonstration Test Site, one might likely expect to hear "Eureka," based on the JSC engineer's body language. This scene could be said to be a dry run of a dry run as Eppler and a team of engineers and scientists from JSC and the Glenn Research Center this month in Arizona's high desert evaluate, test and watch the performance of a variety of extraterrestrial gear. The sand, grit, dust, rough terrain and extreme temperature swings of the desert serve to simulate some of the conditions that may be encountered on the Moon or Mars.

The desert has its attractions. Among them are sand, grit, dust, rough terrain and extreme temperatures. The team will go there because these conditions are like some that may be encountered on the Moon or Mars.

A variety of potential extraterrestrial equipment is getting a trial run. A remote-controlled space tractor-trailer, tiny computer screens mounted inside spacesuit helmets, a robotic geologist named "Matilda," two mobile geology labs, and components of an out-of-this-world wireless network are being tested.

The Desert Research and Technology Studies (RATS) team is led by engineers and scientists from NASA's Johnson Space Center (JSC) in Houston, and the Glenn Research Center in Cleveland. But it includes participants from other NASA centers, universities and private industry.

"For field testing, the desert may be the closest place on Earth to Mars, and it provides valuable hands-on experience," said Joe Kosmo of JSC. He is senior project engineer for the experiments.

"This work [focuses] on the human and robotic interaction we'll need for future planetary exploration," he said, "and it will let us evaluate new developments in engineering, science and operations." 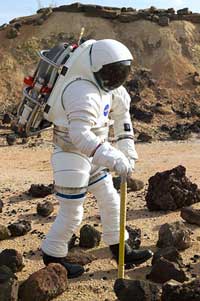 Image to left: Dean Eppler's walk in JSC's rock yard, also known as the EVA Remote Field Demonstration Test Site, serves as a sort of dry run of a dry run. Eppler, here equipped with a MK-III suit, is in Arizona's high desert as part of a NASA-led team using the rugged terrain and variegated climate to try out prototype spacesuits and innovative equipment that may help America pursue the Vision for Space Exploration to return to the Moon and travel beyond. The Desert Research and Technology Studies (RATS) team is led by scientists from the Johnson Space Center and the Glenn Research Center.

Engineers in the Exploration Planning and Operations Center (ExPOC) at JSC are providing mission control-type monitoring of the field tests. Equipment being tested includes:

-- A "field assistant" electric tractor that can follow suited test subjects and be guided with spacesuit-mounted controls;

-- A wireless network for use on other planets that can relay data and messages among spacewalkers, robots and rovers as they explore the surface;

-- A two-wheeled vehicle that could be pulled by the electric tractor to carry astronauts; 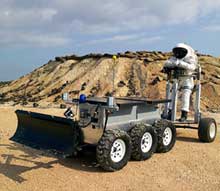 Image to right: A remote controlled space tractor-trailer, equipped with solar panels for recharge of a battery power system and a front blade for extraterrestrial excavation, goes through a JSC rehearsal before a September workout in Arizona's high desert. Also attached is a two-wheel "chariot" for EVA crewmember transport which doubles as a driving station for control of tractor operations. In the prototype spacesuit is Dean Eppler, who is part of a NASA-led team at sites near Flagstaff to evaluate the special tractor and other innovative equipment that may help America pursue the Vision for Space Exploration to return to the Moon and travel beyond.