When he was a commander of one of the U.S. Navy's largest and most lethal submarines, Clinton Cragg had to learn how to fix problems at sea. When everybody else wanted to go home, he turned those same people into problem solvers. 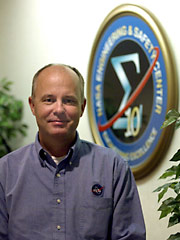 Image at right: Clinton Cragg at Langley Research Center where the NESC leadership is based. Image Credit: NASA/Jeff Caplan

Now with NASA's Engineering and Safety Center (NESC), he is surrounded by problem solvers. And he loves it. Switching from the rigid structure of the Navy to a different organization and communication style, however, has been a challenge for Cragg. "I'm still getting used to the NASA culture," he said.

Cragg is not only getting used to the NASA culture, he's helping change it.

NESC was formed last year in the aftermath of the Space Shuttle Columbia accident. It is chartered to provide an independent assessment of technical issues for NASA programs and to cultivate a safety culture focused on "engineering and technical excellence."

As an NESC principal engineer, Cragg leads many of the independent technical assessments completed by the NESC. An independent technical assessment involves a diverse team of experts to explore dissenting opinions or safety issues for a component of any NASA program that has a need for an outside view. Principal engineers bring together these experts from NASA centers, industry or academia to reach a solution for the engineering problem at hand.

Since January, Cragg has been working on an NESC assessment to determine a better analysis for inspecting the safety of the flowliner on a space shuttle. The flowliner is what makes the flow of liquid fuel smooth between the external fuel tank and the orbiter engine. This independent technical assessment is determining the root causes of cracks in space shuttle flowliners and then resolving the problems or lowering risks to an acceptable flight level.

Cragg's Navy career, including Commanding Officer of the USS Ohio, has helped him bring a unique and experienced perspective to the NESC.

"The submarine itself is a big machine that houses a small community of tightly-knit people," says Cragg, "so in my career I've had a lot of practice with problem solving, both on the technical side and the people side."

This has enabled Cragg to look at the "overall picture" when leading a team working towards a solution. He admits that the Navy and NASA are run quite differently but this has allowed him to incorporate and suggest new ideas and different problem-solving techniques to NASA.

Most recently, Cragg served as the Chief of Current Operations at the U.S. European Command. He was getting ready to retire from a Navy career of over 20 years when a coworker suggested he look into career opportunities at NASA. He found a job offer online that was a perfect match for his backgrounds in systems and nuclear engineering. In November 2003, Cragg joined the newly formed NESC as a principal engineer.

Cragg flew from Europe to an NESC meeting in Washington D.C. during the hiring process and liked the NASA employees he met right away. This became one of his reasons for taking the job, and is still his favorite thing about working for NASA. He feels that liking the people you work with is one of the most important aspects of a job, because it is necessary to get along to work effectively together.

His move to work at NASA was his seventeenth, because of the relocating a military career calls for. He now lives in Yorktown with his wife, two sons and a daughter. Cragg is glad to be able to stay at home for longer periods of time now, but admits that "everyplace has its own attributes and it's kind of neat to see different parts of the world and the country."

When he is not here at NASA working on engineering challenges, Cragg enjoys his hobbies of photography, skiing and reading books on history.

The U.S. Naval academy, the Navy submarine and naval nuclear power training program, and a M.A. from the Naval War College are all part of Cragg's academic history. Education in systems engineering and nuclear engineering has made him a "jack-of-all trades" using both to solve problems on submarines and now leading independent technical assessments for the NESC.