Carpenter, Cooper, Glenn, Grissom, Schirra, Shepard and Slayton quickly became household names across the nation, but to a boy growing up in Queens, N.Y., the band of brothers were heroes. 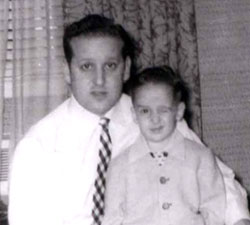 Image to right: A young Charlie Camarda winks for the camera in this family snapshot. Credit: Family photo/NASA

STS-114 Mission Specialist Charles "Charlie" Camarda now keeps their grit and foresight close to him as he readies himself for the next Shuttle.

"It was a time when spaceflight was so intriguing," said Camarda, reflecting on the dawn of an era that put America into orbit. "It was natural for me to want to be an astronaut, to dream of being an astronaut."

Camarda came to NASA, soon after receiving his bachelor's degree, to begin work as a research scientist at the Langley Research Center in Hampton, Va.

In the Thermal Structures Branch, he was responsible for demonstrating the viability of a heat-pipe cooled leading edge for the Space Shuttle. Camarda then headed up the High-Speed Research and Reusable Launch Vehicle programs and oversaw several test facilities such as the Thermal Structure Laboratory, where he worked on numerous Shuttle component developments. 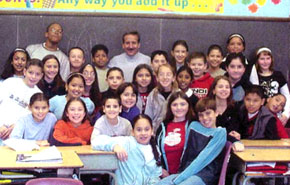 After more than 20 years of experience in diverse Shuttle technology applications, he made a career change that put him closer to his work while achieving his dream. Camarda was named a mission specialist in 1996.

"I was lucky enough to be selected to be an astronaut," Camarda said. "I wanted to work closer with the operational aspects of a flight vehicle."

Camarda served in the back-up crew for Expedition 8, which ended its 194-day mission last spring. Following the loss of Columbia, he stood up to fly alongside his colleagues aboard the Shuttle's next mission.

The STS-114 crew, a tight band of men and women who are dedicated to their purpose, has devoted many hours to prepare for the flight.

STS-114 will deliver supplies and science equipment and prepare the International Space Station for future building. Unlike previous Shuttle missions, it will also test and evaluate new procedures for flight safety and Shuttle inspection and repair techniques.

As in all types of exploration, risks exist.

"I've always been aware of the risks," Camarda said. "I think every one of us understands that spaceflight is risky. It's important that we take those risks for the future of space and for the future of the development of technology to help us on Earth." 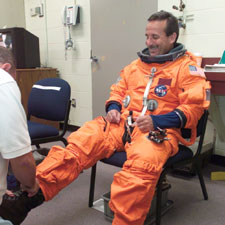 The Mercury 7 were young, resolute test pilots who knew that the outcome of their mission was uncertain but believed in its purpose. Their goals, to probe man's ability to function in space and to recover man and spacecraft safely, remain essential to today's flights.

From the Mercury days of the cone-shaped, one-person capsule that launched the first humans into space to the Space Shuttle, the ability to explore space has advanced and will continue to improve.

"The Shuttle is a magnificent vehicle," said Camarda, who is now part of a new team of seven who will soon board Discovery, returning the Shuttle to space. "It's the only vehicle that can fly to space and return and be reused."

The Return to Flight mission, dubbed a test mission with its never-been-done-before vehicle inspection techniques, seeks to ensure flight safety for its flight and future flights.

"Spaceflight will always be an experiment; it will never be an operational, routine venture, and we need to learn from every flight," Camarda said. "We need to improve and make sure that we're ever-vigilant that we can make this vehicle as robust and as safe as we possibly can."