Cathy Koerner: Flight Director Living a Dream That Began Early
Cathy Koerner wrote a letter to herself and handed it to an English teacher when she was a high school senior. Five years later, she got that letter in the mail. It asked if she were working at NASA. 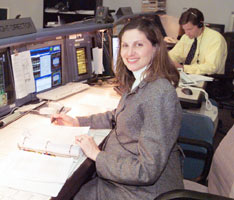 Image to right: Flight Director Cathy Koerner is at her console in the Space Station Mission Control Center.

Today, Koerner, a native of Schaumburg, Ill., is living her dream. She is among the team of flight directors that will lead the Space Shuttle back to space on the first mission after the Columbia accident.

Even before she wrote that letter, Koerner knew she wanted to be a part of NASA some day. Growing up in the late '60s and '70s, space flight fascinated her. "I was always interested in space and space exploration, and NASA is the only place that does that," Koerner said.

Koerner earned her bachelor's and master's of science at the University of Illinois, Urbana-Champaign. While there, she developed her leadership and speaking skills as a student ambassador and member of the student alumni association. Those skills are essential for Koerner's job in Mission Control, where she is one of 21 flight directors, and one of three Shuttle flight directors working the next Shuttle mission, STS-114.

"I'm following all the issues associated with STS-114, and trying to shepherd the flight control team along in that regard. But, really, I'm following lead Flight Director Paul Hill and helping him with flight activities," Koerner said. "With STS-114, I feel very privileged. I'm anxious to get back to flying safely. The International Space Station needs us."

As has been the case with much of the engineering field, there was a time when Mission Control was almost a completely male workplace. But Koerner says diversity is growing and she has never been treated differently at NASA because of her gender. As an example, she remembers a conversation during one shift handover in the control room.

"Someone else pointed out that I was the only woman in the room," Koerner said. "I didn't notice. I've always been treated, not as a woman, but for my technical ability. If you do a job and do it well, then you'll be noticed for doing your job, instead of being noticed because you'e a woman or a minority."

Before becoming a flight director, Koerner worked at NASA's Jet Propulsion Laboratory (JPL) on robotic spacecraft projects. The missions she helped design were robotic precursors to future human flights to Mars. One of them evolved into the innovative Mars Pathfinder rover, which successfully landed on Mars in 1997. 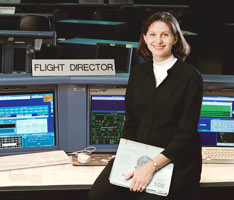 After two years at JPL, Koerner moved to the Johnson Space Center. She worked in Mission Control for 43 missions as a Propulsion Systems flight controller, becoming the lead of that group in 1999.

Four years ago, Koerner became a flight director. Now she is one of only eight with a dual certification as a Space Shuttle and Space Station flight director. Koerner is not the only person in her family who flies people into space. "We're a NASA family," Koerner said.

Her husband Steve is manager of the Data Systems Branch at JSC. Both are instilling their passion for space exploration in their two children. Koerner recently brought her 2-year-old daughter to work with her and is already dressing her 3-month-old in rocket ship pajamas.

Between flights, Koerner enjoys time in the mountains and hiking. One of her favorite places is a bed and breakfast outside of Yellowstone National Park. She also enjoys running and swimming.

Even more than the satisfaction of contributing to a successful flight, Koerner enjoys working with the people at NASA.

"Everyone who works here is so dedicated to working in human space flight and preserving human space flight," Koerner said. "I get to go to work and fly people into space; that's pretty cool. Not everyone gets to say they do that, but lots of people here do."
› Back To Top