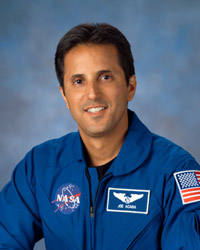 Even if he had not told them about his big news, Joe Acaba's students in Dunnellon, Fla. would have known something was up.

"When I found out I'd been chosen for astronaut training, I cut my long hair," Acaba says. "It's made me the butt of a lot of jokes at school."

Dunnellon Middle School, where Acaba teaches 7th and 8th grade science and math, has been abuzz since he got word of his new mission. When he reports to NASA's Johnson Space Center in Houston, he will be one of three educator astronaut candidates, training right alongside pilots, engineers, and researchers to be fully-trained, permanent members of the astronaut corps.

"I've always been intrigued by space travel," Acaba says. "My parents started me at a young age with 8mm films of the first man on the moon."

"Both of my parents were born in Puerto Rico. My dad moved to the States when he was about 10 and my mother moved when she was about 18. My dad is my hero. He came to the States with very little and worked hard to make sure we had what we needed," Acaba says. "He instilled a real work ethic in me."

That work ethic has helped Acaba earn two degrees in geology. He earned a Bachelor's degree from the University of California at Santa Barbara and a Master's degree from the University of Arizona. After working as a hydrogeologist -- someone who studies water that is under ground -- Acaba spent two years as a Peace Corps volunteer in the Dominican Republic, teaching the people about the environment. "Once I did that, I knew that education was what I wanted to do. The only job that could take me away from teaching is being an astronaut," he says. "Being an educator astronaut is the best of both worlds."

Acaba, 36, has been an educator for the past five years. He was born in Inglewood, California and raised in Anaheim along with two older brothers and a younger sister. He now has three children of his own. He says that as an educator astronaut, he hopes to reach out to minority students.

A science-fiction buff, Acaba is thrilled by the new Vision for Space Exploration and NASA's goals of returning humans to the moon and eventually continuing on to Mars. "It's something that's only been written about in books, but it's going to become a reality soon.

"As an educator, I think the most important thing for me is to fulfill the goal of inspiring the next generation. Motivating kids to learn is as important as the subject matter," he says.