'Next Generation of Explorers' Named 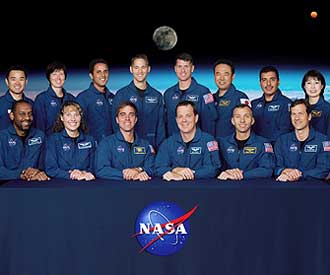 Eleven new astronaut candidates are joining the ranks of space explorers. NASA introduced the new class during a Space Day celebration today at the National Air and Space Museum's Steven F. Udvar-Hazy Center in Chantilly, Va. The class of 2004 will be the first focused from the very beginning on realizing the new Vision for Space Exploration.

"We are indeed living in an age of heroic potential, as we move forward in the Solar System to explore mysterious new worlds, make important new discoveries and help to expand the sense of possibility for all humans on this planet," O'Keefe said.

Former Astronaut and U.S. Sen. John Glenn, who introduced O'Keefe, looked back, and ahead. "How far we've come in the past few years," he said, "how far we yet have to go, and how much we have yet to learn. I'm envious of the young people just coming into the space program now for the opportunities that they have."