STS-114 Mission Specialist Andy Thomas: From Down Under to Up and Beyond
Australian-born Andrew "Andy" Thomas knew early in life he wanted to become an astronaut. What he did not know, then, was that he would one day do just that.

From Down Under to the orbital outpost, Thomas, who grew up in Adelaide, South Australia, now awaits his return to the International Space Station on his fourth journey into space, flying high on the next Space Shuttle.

As a young boy, Thomas saw the birth of an era in exploration. Mercury, Gemini and Apollo opened a new frontier in space. Inspired by the generation of explorers of the '60s and '70s who led America's space endeavor, he sought to achieve what seemed beyond his reach.

"For a young kid growing up in Australia at that time, the prospects of becoming an astronaut were remote, to say the least," Thomas said.

However, Thomas was an aspirant who knew that his education was the key to his future.

"I've always believed that the pathway to many interesting experiences can be opened if you have the right kind of education," he said. "In fact, it can open doors that you can't even imagine and that would forever remain closed."

With a no-nonsense attitude, Thomas tackled an ambitious academic calling. With First Class Honors, he received a bachelor's degree in mechanical engineering from the University of Adelaide in 1973.

Without stopping, he began to pursue post-graduate studies, and four years later, he received his doctorate in mechanical engineering, also from the University of Adelaide. It was during his research on aerodynamics-related problems that the first door of opportunity opened for Thomas. 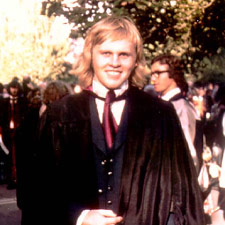 In 1977, he came to the United States to work for Lockheed Aeronautical Systems in Marietta, Ga.

As a research scientist for Lockheed, Thomas continued his work on fluid dynamic flows and aircraft drag. He later headed a research team that further examined a variety of aerodynamic and flight test problems.

Holding onto a dream he had long ago, Thomas took advantage of yet another opportunity that led him to NASA's Jet Propulsion Laboratory, where he could work closer with the space program. At JPL, he worked with several facets of spaceflight that involved studies in low gravity on NASA's KC-135 aircraft and Shuttle hardware.

It was at JPL that his highest ambition would finally be within his grasp. In 1992, Thomas was selected to join America's Astronaut Corps and completed training as a mission specialist the following year.

May 19, 1996, marked his first day in space. He has made three trips into space on two Shuttles, Endeavour and Discovery. He now looks forward to his fourth voyage on the next Shuttle flight, the first since the fleet was grounded after Columbia. 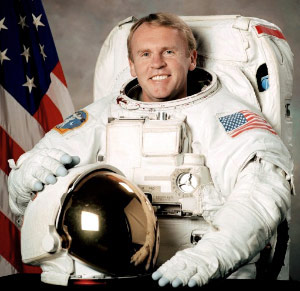 More critical on this 12-day return-to-flight mission are the tasks that lie ahead for Thomas and his crewmates. A logistics flight, the STS-114 mission will bring supplies like food, water and science equipment to the Station.

However, it will also serve as a test flight. In space, the crew will put into practice many hours of training carried out over many months before the Shuttle's return flight. Thomas' primary responsibility will be to undertake new methods to inspect the orbiter in flight and to verify its integrity for entry into the Earth's atmosphere. These techniques will require the deployment of the new inspection boom and laser sensor systems and will establish improved safety for this and all Shuttle flights to come.

Three spacewalks will also be conducted during this mission, one of which will include the critical tile repair exercises. Among his other tasks, Thomas will choreograph the planned spacewalks of the upcoming Shuttle mission.

"I liken it to being the conductor of an orchestra," he said. "EVAs are very structured, organized activities; they have to be for safety."

Getting the Shuttle off the ground and back into space to do what it was designed to do is just one step in a journey of exploration. But this step symbolizes a sense of accomplishment beyond the technical aspects, Thomas says.

"I see that as a very logical progression in the idea of human exploration of going out initially in ships from the civilization centers to the uncharted parts of the world," he said. "I see the next steps as going beyond the world, out into the solar system."