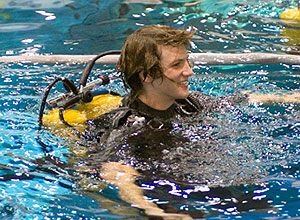 Matt Tanner has gone where no astronaut’s child has gone before: into the depths of the Neutral Buoyancy Laboratory.

Image at right: Matt Tanner, an intern at the Johnson Space Center, assists his father, astronaut Joseph Tanner, as the STS-115 mission specialist trains for scheduled spacewalks on the next space shuttle mission. Credit: NASA

Matt, the 19-year-old son of Astronaut Joe Tanner, spent his summer interning as a diver at the NBL. He’s only the second intern the program has ever had, and he’s the first who also happened to be related to one of the people being trained in the pool. As such, he said, what already would have been a cool summer job was upgraded to amazing.

And it changed the way he looked at the space program.

“I had no idea how many people and how much work went into everything,” Matt said. “As an astronaut’s child, I thought my dad was all powerful – especially as a little kid. I had no clue.”

As a diver, however, Matt saw up close the attention to detail it takes to pull off what his father and other astronauts do. When Joe heads up to the International Space Station in late August, Matt said it will be the first time he expects to understand what’s going on. 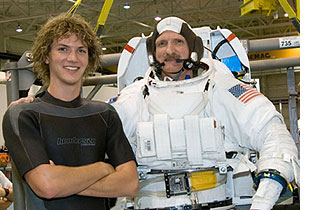 “I now know the parts of the space station,” he said. “I know what I’m looking at. I know a lot of the acronyms that they use and the names of the tools. You hear about it and you talk to him all the time, but you don’t really know what he does. But to get out here and actually have the opportunity to see what he’s working on – it was really, really neat.”

Joe had a different description of the experience.

“It’s been kind of … weird, I guess is the word,” he said. “When you get into the water – an environment that you’re very accustomed to as a work environment – and there’s your son there holding a float camera … But it’s pretty cool.”

In fact, the first time that happened is considered the highlight of the summer by both men. It was Matt’s first solo dive as a qualified camera diver, and it was a difficult, busy run. Matt was charged with keeping the camera on Joe at all times, while avoiding the four camera cables and four umbilicals and making his way back and forth across the pool. Matt called it awesome. Joe just said it made him proud.

“I was keeping an eye on him,” Joe said. “It was a lot of work – he did a good job. I told the guys in the dive brief in the morning that it was a special day for me – I wasn’t going to get a lot of understanding out of it. They razzed me a little for being mushy. But that day was pretty special.”

It was Joe’s idea for Matt to apply for an internship at the NBL, although it didn’t take much convincing. 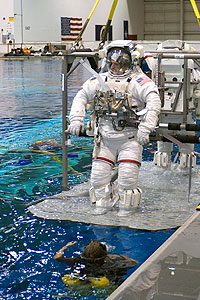 “Who wouldn’t want to do this?” Matt said. “All my friends at school are all jealous. This has got to be the best summer job ever.”

Still, Joe had more than just a fun summer in mind for Matt.

Image at right: Astronaut Joseph Tanner is lowered into the underwater training facility at the Neutral Buoyancy Laboratory, where his son, college sophomore Matt Tanner, is waiting to adjust the equipment that keeps him from sinking or bobbing back to the surface. Credit: NASA

“You learn by the people you work with,” Joe said. “This is a really great place. It has that can-do attitude – the old NASA attitude that, whatever it takes to make it happen, we’re going to do it right. I’m really glad that he’s working in that environment. The lessons he’s learned this summer are going to serve him real well, whatever he ends up doing.”

Matt is about to begin his second year as a mechanical engineering major at the University of Texas. After he finishes his undergraduate work, his plan is to go on to law school. But that’s not set in stone – if he’s sick of school by then, he said, he may stick with engineering. And he hasn’t quite let go of a childhood dream of following in his father’s footsteps.

Still, even if he does eventually rule it out, Matt said he’ll always be glad to have had this summer to look back on.