Eileen Collins -- NASA's First Female Shuttle Commander to Lead Next Shuttle Mission
On her last mission, Eileen Collins became the first (and currently only) female Shuttle commander. On her next, she will command the historic STS-114 "Return to Flight" mission, the first after the Columbia tragedy.

On becoming an astronaut: 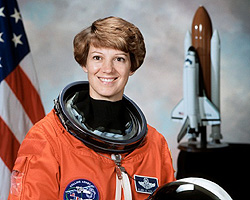 "When I was very young and first started reading about astronauts, there were no women astronauts." However, she was inspired while she was a child by the Mercury astronauts, and by the time she was in high school and college, new opportunities were opening up for women in aviation. "My timing was really great," she said. Collins joined the Air Force, and during her first month of training, her base was visited by the newest astronaut class--the first to include women--and her path was set. "I wanted to be part of our nation's space program. It's the greatest adventure on this planet--or off the planet, for that matter. I wanted to fly the Space Shuttle."

On being the first and only female Shuttle commander:

"Hopefully not for long!" While the distinction of being the first is an honor, Collins said she's looking forward to losing the part about being the "only" female commander. She said she hopes current astronaut Pam Melroy will soon join her, and that more will follow. "I'm really pulling for her." Collins said that she encourages young women to become test pilots so that they can someday become Shuttle commanders as well. "The young people are going to be the ones to take us on to more exciting adventures."

On her advice for future astronauts:

"My advice to young people is, go into the field you are most interested in. If you love your job, you'll do well in your job." While coming from a mathematics, science, or technology background is a must, there's a lot of variety in what exactly you can pursue. In fact, Collins discourages people from looking at what other astronauts are in and choosing that. The exact opposite worked for her--when she joined the corps, there were no astronauts in her field, operations research. "I said I think I can fill a void, and I think they bought it." It's paid off, too, she said, since much of her background ties in directly to the operation of the Shuttle.

On the most exciting thing about spaceflight:

"If you had asked me this question after my first mission, I would have said the launch. Now, I would say seeing the successful completion of the mission." As an example, she cited the first mission she commanded, STS-93, on which the Chandra X-Ray Observatory was deployed. There were so many people involved in the Chandra project and the launch, she said, and it's been really rewarding seeing the amazing pictures that Chandra has taken. "Everybody came together and made it happen."

On her upcoming first visit to the International Space Station (ISS):

"It's hard to wait. I'm so excited." In fact, she said, the opportunity to visit the ISS is why she decided to keep flying at a point in her career when many astronauts retire from spaceflight. "I had never gone to the Station, and I really wanted to go to there. I really wanted to be part of the Station mission."

On the future of spaceflight:

"I would like to see more people traveling to space someday. I would like to see space tourism blossom. It's such an incredible experience." Collins said that during her spaceflights, there is so much she has to do that there is little time to just enjoy being in space. "Someday I would like to go into space as a tourist, and have the time to have fun." She's very interested in developments in the field of civilian spaceflight, such as the X Prize competition. "I just think that's really exciting. That's an experience that more people ought to have. I think we'd have a better community on Earth if more people traveled in space."

On her upcoming "Return to Flight" mission:

Pilot, Discovery STS-63--Collins became the first female Shuttle pilot during this 1995 mission, which included a rendezvous with the Russian Space Station Mir.

Commander, Columbia STS-93--Collins became the first female Shuttle commander on this 1999 mission, which included the deployment of the Chandra X-Ray Observatory.

Courtesy: NASAexplores
› Back To Top