Space Food: A Taste of the Future
Imagine being stuck in a house for months, not able to venture out to go to the grocery store whenever a particular food craving hits. All that you have to survive on is already stowed in the pantry. The items in this pantry have been predetermined long ahead of time, and if your taste buds happen to change, you are simply out of luck.

The Space Food Systems Laboratory at Johnson Space Center (JSC) in Houston does all it can to ensure the astronauts are happy when it comes to their meals.

Food choice is extremely important to astronauts, and the longer the flight, the more significant those choices become. The meals are stowed pantry-style onboard Space Station, so crewmembers can eat food items in any order they wish. For instance, if crewmembers want to have chicken three nights in a row, they can do that.

Being on Space Station, so much of what is going on is beyond their control," said Vickie Kloeris, JSC manager of Space Food Systems. "And so food is just a comfort thing that they would like to feel they have some input on or some control over. It's just a big psychological thing -- I don't know if we've flown anyone to Station that has not been concerned about their food."

Emilce (Emmy) Vest, Food Services director and executive chef for JSC, agrees that comfort food is of the utmost importance, especially when astronauts are in space.

"In situations where there is little outside stimulation and we're somewhat lonely, food becomes more of a focus because it gives us sensual and chemical stimulation," Vest said. "We also crave the social payoff in 'breaking bread' with our companions." 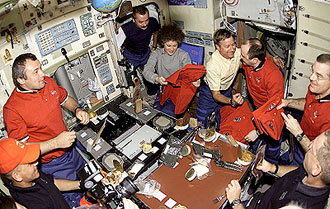 Image above: The STS-105 crew enjoys the hospitality of Expedition 2 onboard the International Space Station. Shared meals offer crewmembers social opportunities that are important to the emotional welfare of astronauts living far from home for months at a time. Image credit: NASA.
Space Food Tidbits: