Making Music in Microgravity
Astronauts who play musical instruments here on Earth take them into space to serenade the stars and heighten their morale. 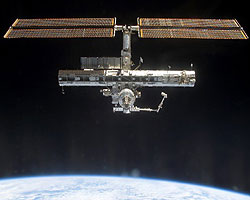 On longer missions there is sometimes enough free time to pursue their love of music. On shorter flights their instruments are brought as sentimental items and as a reminder of their connection with Earth.

At left: International Space Station (ISS) photographed by a crewmember on board the Space Shuttle Endeavour after undocking

What's interesting is that music sounds exactly the same in space as it does on Earth, according to the astronauts. But playing an instrument is not as easy as you may think.

The action of pressing a key or blowing into a wind instrument pushes you away from it because of the lack of gravity. Gravity is a force we take for granted here on Earth but the lack of it in space has to be dealt with creatively.

Because "necessity is the mother of invention," the astronauts created novel ways to stay in place using foot restraints and attaching bungee cords to their instruments to keep them from floating away. 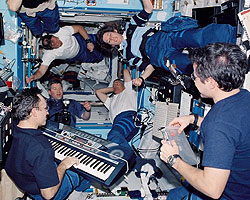 At right: Carl Walz performs for a group of astronauts on board the International Space Station

Tests are performed on the instruments before they're approved for flight. The materials that are used often produce gases and in the closed environment of the spacecraft the possibility of fire is magnified. Testing is crucial to protect the astronauts and spacecraft from any potential hazard.

Electronic equipment can often affect the instrumentation of the Station or Shuttle. They too are tested for electromagnetic radiation emissions.

It's important for the astronauts to have this time for musical diversion during the long days and nights in orbit. Many feel the longer they are in space the more important it is to keep the time away as consistent with home life as much as possible.

Astronaut Carl Walz, knowing he'd be living on the International Space Station (ISS) for as long as six and a half months, asked about taking his keyboard. Walz felt there'd be a little part of home he could take with him on his long journey into space and it's evident his colleagues enjoyed the musical interlude.

Some astronauts formed a band that performs here on Earth. Perhaps someday they'll record a CD so all of us can enjoy music from the Heavens.