Four Shining Years of Humans in Space
The International Space Station -- the world's largest orbiting laboratory -- shines in the night sky as humans live and work aboard for 1,460 consecutive nights and counting.

For four successive years, humans have lived and worked continuously in space as they circle the globe from their home away from home, more than 200 miles above the Earth. The Station's steady white glow, brighter than the night's stars, serves as a constant reminder that every day someone is living and working somewhere out there. 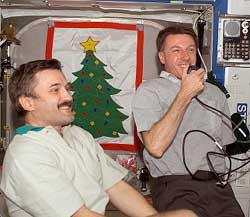 Before humans first ventured into space more than 40 years ago, mysteries of the universe were left only to the imagination. Today, all of this has changed. Every day that humans live in space, truths about our world in which we live become even clearer.

Each crew, since the first Station residents arrived Nov. 2, 2000, discovers more about what it takes to live in space for long periods of time. Understanding how our bodies react to low-gravity and prolonging life in space will lead humans deeper for more answers still to be discovered.

"Every challenge for the International Space Station crews, flight control teams and management adds to the knowledge base we need to develop longer spaceflight missions to places like the Moon and Mars," said Bill Gerstenmaier, International Space Station program manager. "The work we're doing on Station is directly connected to future exploration."

In 2004, international cooperation and science are at the forefront of human habitation in space.

This year the eighth, ninth and tenth crews, each made up of one American and one Russian, illustrate teamwork across international boundaries, particularly during their spacewalks. 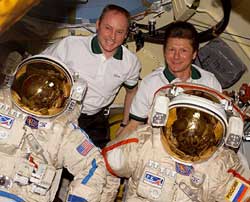 In February, the Expedition 8 crew, Commander Michael Foale and Flight Engineer Alexander Kaleri, conducted the first-ever spacewalk from the Space Station by a two-person crew without a crewmember left inside. The excursion demonstrated that these kinds of spacewalks, using the procedures developed by American and Russian flight controllers working together, could be successful and safe.

Two spacewalks were planned for the next crew, Expedition 9 Commander Gennady Padalka and NASA ISS Science Officer Mike Fincke. Within days of their arrival, a breakdown of an external electrical component added a third spacewalk to their mission. Then, problems were found in the U.S. spacesuits, and international cooperation came through again.

Teams worked out procedures for the crew to wear Russian spacesuits to work on the U.S. side of the complex. They worked closely to combine tools and procedures, even switching between control centers and languages, to complete the successful repair.

Astronauts living aboard the Station have used and maintained the orbiting laboratory. With no Space Shuttles to deliver supplies since the Columbia accident in February 2003, repair parts have been shipped via the smaller Russian Progress resupply vehicle.

Fincke demonstrated that the U.S. spacesuits could be taken apart and repaired in space. Normally, whole new suits would have been delivered as replacements by a Shuttle. Fincke's work, now carried on by Expedition 10 Commander Leroy Chiao, will restore two U.S. spacesuits to operation.

Foale and Kaleri used a small set of tools to perform the unprecedented repair of a stabilizing gyroscope in their exercise treadmill. A new gyroscope would have been too large to deliver aboard a Progress.

"The crews have shown that repairing hardware in space with few supplies and equipment is possible," Gerstenmaier said. "Missions far from Earth will benefit from their work."

Science on the Station this year was focused on future exploration, with human life science experiments taking on highest priority.

One such experiment called ADUM (Advanced Diagnostic Ultrasound in Microgravity) was used to develop the remote medical diagnostic and telemedicine capabilities that will be needed by crews on distant exploration missions. Another experiment, called FOOT, evaluates the exercise forces necessary to maintain muscle and bone health on long-duration missions. A related experiment, called Biopsy, continues to study some of the basic fundamental principals involved in the muscle atrophy that occurs during spaceflight. 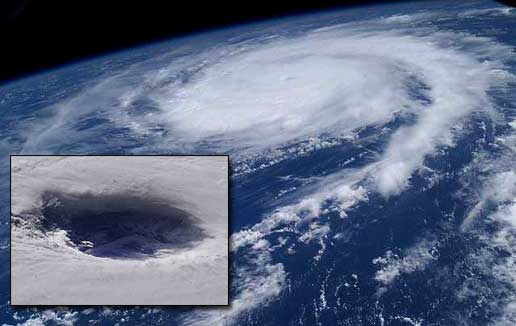 Image above: Crewmembers aboard the Station monitored the deadly 2004 hurricane season from orbit. The image of Hurricane Frances, above, is one of many storm photos taken by the crew, and the inset photo shows the dangerous eye of Hurricane Ivan. Photo Credit: NASA

Along with tackling technical tasks the ground support teams strived to make the astronauts feel at home in space. Mission Control, Houston, kept Fincke in touch with his family as his wife gave birth. Fincke was able to talk from space to his wife using an Internet protocol telephone and private family conferences via satellite.

Chiao was the first American to vote in a presidential election while in orbit. Through a special law passed in Texas in 1997, astronauts are able to vote electronically from space. Chiao submitted his electronic ballot to his county clerk's office through a secure e-mail connection via the MCC. 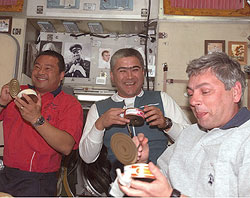 Another milestone in spaceflight was reached this year when Foale accumulated more time in space than any other U.S. astronaut, logging 374 days, 11 hours and 19 minutes on his Station flight and previous missions. The astronauts and cosmonauts serve as test subjects, blazing a trail in understanding what happens to the human body while living without gravity for long periods.

Chiao and Expedition 10 Flight Engineer Salizhan Sharipov will continue to maintain the Station and conduct scientific research for the next six months. The Space Station has been under construction for six years with the arrival of the first element, the Russian Zarya module, in 1998. Major assembly is set to resume with the return of the Space Shuttle to flight next year.

Humans living and working on the Station are paving the way to an even bolder voyage in space -- a return to the Moon and onward to Mars.