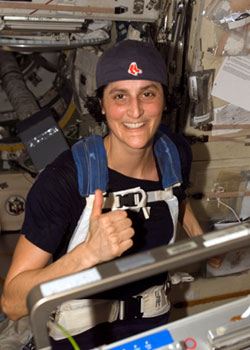 During my treadmill run in the module today, I found myself wishing for a hook-up to the oxygen generation system, but it’s already been installed on the space station. No help there. Still, I kept running, despite my fatigue.

I decided to entertain myself mentally by thinking of Christmas gifts I could purchase for friends and family. That's when I enjoyed a brief flash of brilliance. I thought of the perfect gift for all my running friends.

I'd have t-shirts printed up with the words "REAL RUNNERS DRINK THEIR OWN SWEAT" printed in big black letters across the front. Or maybe my friends would rather have a bottle of very special drinking water?

Since I knew it was still quite warm outside (this is Alabama), the Christmas spirit soon left me. My mind drifted back to the task at hand -- running and sweating.

Next, I threw a conversation starter out to the fellow running on the treadmill across the aisle from me, "It smells funny in here, doesn't it?" No response. I looked at him more closely and realized he was wearing headphones. I could have enjoyed myself and passed some time by making some jokes at his expense since he couldn't hear me anyway. My basically immature sense of humor made this a very tempting option, but I decided to act my age, for once, and keep my mouth shut. Just because I never remember to bring my headphones is not a good enough reason to pick on people who do.

I must admit that I'm getting a little tired of treadmill running. But just think -- Suni Williams ran 26.2 miles on one of these things during a recent mission! And she was weighted down to simulate Earth's gravity conditions.

How do astronauts stay in shape during space missions? And how will people exercise on the Moon when they inhabit a lunar outpost? How will they keep their bones strong? Everyone knows that weight-bearing exercise is necessary for bone health, but nothing will weigh much on the moon.

After my running session, I researched answers for these questions. Here are some answers paraphrased from a NASA website (http://liftoff.msfc.nasa.gov/academy/astronauts/exercise.html) and the Canadian Space Agency’s website (http://www.space.gc.ca/asc/eng/astronauts/living_exercising.asp).

Scientists have discovered that astronauts do suffer some bone and muscle deterioration because their bodies don't get the resistance they were used to in gravity. Someone decided that astronauts on missions would therefore have to participate in a planned exercise program from now on to counteract these effects.

When astronauts on the space station use a treadmill, spring-loaded cords attach to both sides of the treadmill and to a harness around the runner's waist. The cords can be loaded with 66 to 100 percent of the runner's body weight to determine the strength of the workout.

Moving air is supplied to dry off the perspiration produced from exercising. Otherwise, the sweat would stick to the skin and grow thicker and thicker.

Sometimes astronauts on the space station exercise on a cycle ergometer -- sort of a glorified stationary bicycle. The astronauts use clip pedals and have the option of waist straps, back supports, and hand holds to secure themselves to the machine. The astronauts may also use a resistance exercise device, which consists of a pair of canisters attached to a pulley system and harness to mimic weightlifting on Earth. With this contraption, astronauts do heel lifts, squats, and deadlifts.

I assume that weightlifting in space is about as much fun on the space station as anywhere else -- not much. But it's good for you!