Democracy in Orbit: Chiao to Vote in Space 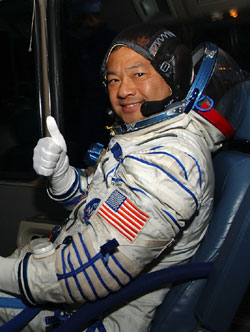 Of the millions of American citizens eligible to vote this Election Day (Nov. 2), there's only one who won't be on the planet. But Expedition 10 Commander Leroy Chiao isn't letting that little detail keep him from casting his ballot.

Image left:Chiao gives a "thumbs up" on the way to the launch pad in Kazakhstan on October 13. Photo Credit: NASA/Bill Ingalls. Click for larger image

Even though he'll be floating around the Earth 230 miles up on the International Space Station, Chiao is not too far from the polls to stand up and be counted, thanks to a bill passed in 1997 by Texas legislators.

The bill sets up a technical procedure for astronauts -- nearly all of whom live in Houston -- to vote from space. (And here's a bonus bit of presidential trivia: The bill was signed by the then-governor of Texas, George W. Bush.)

Here's how it will work. An electronic ballot, generated by the Galveston County Clerk's office, will be emailed to Chaio's secure account at NASA's Johnson Space Center. Mission Control Center there will transfer the email to the Station using a high-speed modem via satellite, the same way they send all astronauts e-mails to the Station.

Then, Chiao will cast his vote and use a secure e-mail connection to send his ballot back to the clerk's office to be recorded. It will be the first vote ever to be cast in a presidential election from space. But Chiao's democracy in orbit doesn't end there.

He's using his unique experience to encourage others to exercise their civic duty. He's sent a special message from space to all eligible voters urging them to go to the polls. The get out and vote public service announcements are airing on the NASA TV Video File.


"A few years ago, the Texas State Legislature passed a bill allowing astronauts to vote from space," Chiao said from aboard the Space Station. "Why did they go to so much trouble for just a few people? Because voting is each citizen's most basic, yet most powerful tool for participating in America's cherished right to choose its leaders."

Chiao is only a few days into a six-month mission as commander of the tenth crew of the International Space Station. His Expedition 10 crewmate is Russian Cosmonaut Salizhan Sharipov. Returning Expedition 9 crewmember Mike Fincke will be voting by absentee ballot, because he'll be in Russia for post-flight activities on Election Day.