The eye widens, zeroes in and blinks. Whir, click-click. Captured! 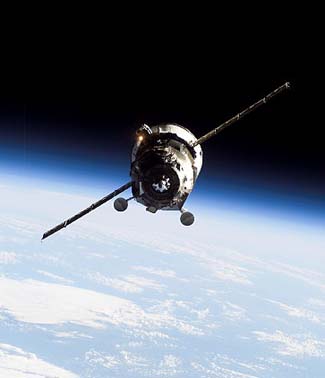 For more than a century, travels to exotic lands have inspired explorers to record their journeys in snapshots. However, no place on Earth lends a better view to these beautiful places than in space.

Unlike most travelers, Astronaut Leroy Chiao has come full circle. Orbiting the Earth every 92 minutes onboard the International Space Station, Chiao made his trek from afar capturing more than 24,000 images along the way.

Image right: Progress 17 resupply ship approaches the Station. Expedition 10 Commander Leroy Chiao took this photo from space, one of his top ten photo picks among more than 24,000. "To me, it [the photo] says spaceflight," Chiao said. "I was able to capture some of the flourescent blue of the Earth limb, and the lighting on the spacecraft creates the nice shadows." Photo Credit: NASA

Photography – Greek for the words light and writing – from space is useful for scientific research on Earth. Among Chiao's tasks in space as Expedition 10 Station Commander was to snap up various meteorological and atmospheric phenomena as well as geographical, manmade and natural landmarks.

With no darkroom onboard, the perfect temperature and mix of developer, fixer and stop-bath solutions are replaced with pixels, a sensor and various lenses instead. Digital cameras aid astronauts in getting the right shot with instant image processing.

"I was able to see my results quickly and adjust technique and composition for next time," Chiao said.

Still, pointing a digital camera at Earth from space while flying 230 miles above the planet calls for a different approach to "light writing" altogether. 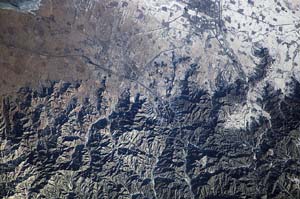 Image left: First confirmed photo from space of the Great Wall of China. Astronaut Leroy Chiao set out to settle the debate on whether one can see the Great Wall from space. "Although I captured it in photos, I cannot say that I was able to discern the wall," Chiao said. "If one had perfect weather conditions and knew exactly where to look, the Great Wall should be visible. The task of identifying it is more difficult." Photo Credit: NASA

"Being in space means having to find ways to support yourself and the camera," Chiao said. "Since the Earth is moving past at 17,500 mph, one must pan the camera as the shutter is released, otherwise the image will smear and appear out of focus."

A special team of scientists identify photo opportunities that align with the orbiting vehicle's path and notify the working astronauts in advance. Other shots come by chance as astronauts peer out their window to the world.

Flying at five miles a second, however, these opportunities come only as mere flashes. Trigger-happy fingers must set the perfect aperture and shutter speed – major aspects of good photography – before the opportunity vanishes.

Weather and lighting also play a major factor in photography from space. 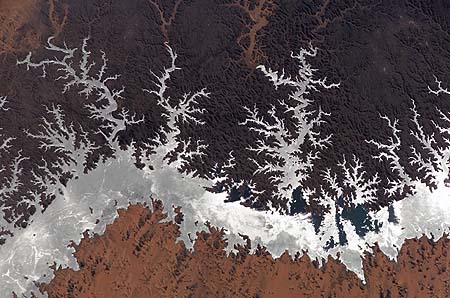 Image above: Lake Nasser glistens as the Station flies over Egypt. "I was able to shoot this photo just as the sun was reflecting off of the water, making it appear to be liquid metal," Chiao said. Photo Credit: NASA

With six months of consistent practice, Chiao improved his camera skills while in space, and developed a real passion for it.

"Technically, one can practice and master the right methods of shooting good space photos," he said. "For engineers like me, I recommend that they think about composition. That is, don't just capture the data, but try to compose photos that are beautiful too."

In photography, the eyes have it. When shooting from space, this is especially true. The camera's eye – the lens – determines what will be in the picture and how. It also gives the photographer more reach or wider angles. 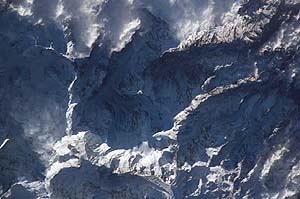 Depending on the lens and the aperture (the size of the camera’s “eye” opening) some shots show great depth of field with artistic details of hard rock, ridges, valleys and rivers.

Among Chiao's photo album is the first confirmed picture from space of the Great Wall of China. Although the Great Wall was difficult to see with the unaided eye, Earth’s geological diversity in Chiao’s collage of images remained very visible. Chiao also collected snapshots of the Chinese launch site.

"The launch site was of great interest to me, because of its historical significance," Chiao said. "It is only the third place in history from where astronauts were launched into space." 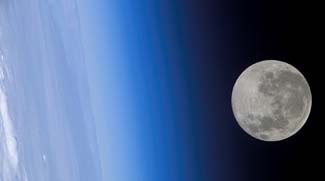 Other memorable shots for Chiao were Lake Nasser in Egypt, the pyramids at Giza and the Moon next to the Earth's limb, a shot that can only be taken from space’s vantage point.

Image left: The Moon aligns next to the Earth limb. "This photo to me is about dreaming," said Expedition 10 Commander Leroy Chiao, who took this photo while onboard the International Space Station. Photo Credit: NASA

"I try to be artistic, but I am in many ways, a typical engineer," Chiao said. "Photography in space helped bring out the artistic side in me. The beauty of the Earth was very inspiring, and I tried to find new ways to capture and express that beauty."

Chiao's vivid experience in space opened new horizons for him. Though being an astronaut will always come first, he plans to continue to develop his photography skills now that he’s back on Earth.