Out of This World Thanksgiving

The Thanksgiving meal in space is not as traditional as it is on Earth. There is turkey, but it comes in a foil package, which affects the way that the main course is served. In 2001, Expedition 3 Commander Frank Culbertson and Flight Engineer Mikhail Tyurin gave a demonstration of how the ISS turkey is cut. Culbertson used a pocketknife, rather than a carving knife, to open the package containing the rehydrated turkey.

The Expedition 8 crew currently living onboard the Space Station, Commander Mike Foale and Flight Engineer Alexander Kaleri, can celebrate this year's Thanksgiving with rehydrated turkey, also. The last NASA astronauts to celebrate the holiday in space were the STS-113 and Expedition 5 and 6 crews during Space Shuttle Endeavour's visit to the International Space Station in 2002. 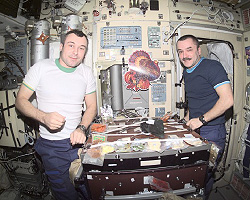 Expedition 5 NASA ISS Science Officer Peggy Whitson said that her Thanksgiving in space is one that she will always remember. She wrote, "For Thanksgiving, it was a lot like being home, except that we (Station crew) were hosts to our visiting family/friends (STS-113 Shuttle crew). After a challenging day of work, which included the preparations for and the conduct of a space walk with robotic arm support, we celebrated with smoked turkey in foil pouches, rehydrated mash potatoes (unfortunately sans gravy), and rehydrated green beans with mushrooms (better than it might sound).

"Blueberry-cherry cobbler, compliments of our guests, and served on a tortilla was a real dessert treat for the Station crew, since that was not included in our meal rotations. Celebrating this holiday in space with some visiting friends was a very special experience, one that I will remember fondly in Thanksgivings to come."

The spacewalk that STS-113 Mission Specialists Michael Lopez-Alegria and John Herrington conducted was the first U.S. extravehicular activity at the Station performed on Thanksgiving. During the excursion, they outfitted the Port 1 (P1) Truss, which had been attached to the ISS two days earlier.

Astronauts Gerald Carr, William Pogue and Edward Gibson celebrated the first Thanksgiving in space in 1973. They were the third crew to live on Skylab.

Thanksgiving was celebrated on Space Shuttle Columbia and the Russian Mir space station in 1996 and 1997. The STS-80 crew celebrated Thanksgiving aboard Columbia in 1996 as Astronaut John Blaha celebrated the holiday on Mir with Russian Cosmonauts Valery Korzun and Kaleri.

In 1997, Astronaut David Wolf spent the holiday on Russia's Mir space station as the STS-87 crew orbited the Earth aboard Space Shuttle Columbia. Neither of Columbia's Thanksgiving missions visited the Mir.

Korzun celebrated his second Thanksgiving in space with U.S. astronauts in 2002 as the commander of Expedition 5. Kaleri will also get to celebrate the holiday again this year with Foale aboard the Space Station.

Check out interesting facts about space food here: http://spaceflight.nasa.gov/living/spacefood/index.html.
› Back To Top