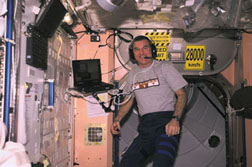 Sometimes it's nice to pick up the phone and call a friend just to talk about the day's events. Astronauts are no different, but when they want to call family and friends, they're making very long-distance phone calls. How do astronauts call home? They have several ways to keep in touch, but the most popular choice is the Softphone.

The "soft" in Softphone pertains to software. Softphone works through the laptop computers that astronauts use on the International Space Station (ISS). The system uses Internet Protocol (IP) information packets to route the signals, and when connected, astronauts can use the computer keypad to dial any number and call anyone they wish. They speak through a headset with a microphone, and the signal is sent up to 144,810 kilometers (90,000 miles) by way of a communications satellite. That long distance can mean there is a time lag of up to 1 second in conversations. Standard IP phone systems would disconnect with such a delay, so the Softphone astronauts use is modified to accommodate this. Astronaut television interviews show that same 1-second lag. 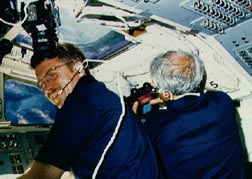 Even with Softphone, there are still a few inconveniences associated with ultra-long-distance phone calls from space. Astronaut phone signals are sent via Ku Band, which is a specific frequency of satellite transmission used for communications. Sometimes the ISS is out of range of the satellite, and other times the ISS itself blocks the coverage, since the satellite can only receive signals that are in direct line of sight. That big structure may block its own signals, depending on its location to the satellite at any given moment.

Before Softphone, astronauts communicated exclusively by radio with mission control at Johnson Space Center. Calls to family and friends could be patched into the public telephone network, but astronauts wanted to be able to call without going through mission control-both for privacy and convenience. In the past, sometimes astronauts' family members would wait for a call at mission control, and they were also able to speak using video conferencing technology. Still, it lacked that personal touch. Using Softphone isn't a crucial aspect of the space program, but it's one of those little things that means a lot when you're separated from the folks back home for months at a time.

One of the biggest barriers to successful telephone calling was the obvious lack of traditional telephone and cable lines. A new digital tool called the Orbital Communications Adapter allows high-speed data transfers and carries voice and video signals. So now, besides calling home, astronauts can send e-mails to co-workers and family. Those are the comforts of home that make life in space just a bit more enjoyable.

Courtesy of NASA's Human Exploration and Development of Space Enterprise
Published by NASAexplores: March 6, 2003
› Back To Top