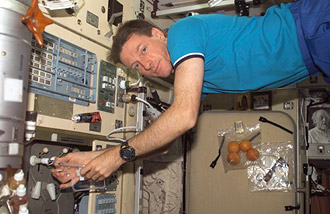 Image above: NASA Astronaut Michael Foale is the new record holder for most cumulative time in space by a U.S. astronaut.

As each day passes during the remainder of his stay aboard the International Space Station, Expedition 8 Commander Michael Foale will continue to add to an impressive U.S. space flight record. At 1:47 p.m. EST Dec. 8, Foale surpassed Carl Walz with the most cumulative time in space for a U.S. astronaut. Walz has spent 230 days, 13 hours, 3 minutes and 37 seconds in space.

To mark the occasion, Foale received a call from Walz, who was at NASA Headquarters in Washington, D.C., moments before the record fell. Walz congratulated Foale on the accomplishment.

"Records are meant to be broken," Walz said. "I am certainly glad that after your pioneering efforts on Mir that you had a chance to break this record."

Foale is currently in the middle of his sixth mission in space, which began Oct. 18 with the launch of the ISS Soyuz 7 spacecraft. He is on the Station with Russian Cosmonaut Alexander Kaleri, who is serving as Expedition 8's flight engineer. If his stay in space concludes as scheduled in late April 2004, Foale will have amassed 375 days in space. 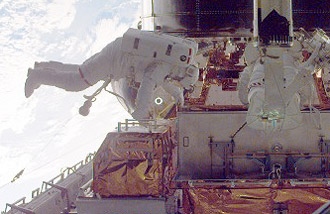 He made his third trip into space and his first of two trips to the Russian Mir Space Station in 1995 with STS-63. It was the first time a Space Shuttle rendezvoused with Mir. During his second trip to Mir in May 1997, not only did STS-84 dock with the Russian station, but Foale remained behind for a 4.5-month tour of duty. He returned to Earth with STS-86 in October.

Foale's fifth trip occurred in 1999 as a member of the STS-103 crew. This mission was the third to visit the Hubble Space Telescope for servicing. The STS-103 crew installed new equipment and performed other maintenance tasks to upgrade the space-based observatory.

Prior to Expedition 8, Foale had accumulated 178 days in space and conducted three spacewalks, totaling 18 hours and 49 minutes.

Walz, a veteran of four space flights, holds the U.S. single space flight endurance record with Expedition 4 crewmate Dan Bursch. They stayed in space for 196 days from December 2001 to June 2002. Bursch is also third on the U.S. list for cumulative space flight time with 227 days.

Kaleri is also among the most experienced space travelers. By the end of Expedition 8, Kaleri will have logged 610 days in orbit on four flights, placing him fifth on the all-time space endurance list. Another Russian cosmonaut, Sergei Avdeyev, holds the all-time record for time spent in space, with 748 days accumulated on three flights. Cosmonaut Valery Polyakov set the world single-flight endurance record in 1995, when he completed a 438-day mission on Mir.

Read the latest information on the International Space Station

Visit the Expedition 4 crew page
› Back To Top