Expedition 9 in Command of Station
Expedition 9 Commander Gennady Padalka and NASA ISS Science Officer Mike Fincke are orbiting the Earth aboard the International Space Station. They are the ninth set of astronauts and cosmonauts to call the ISS home. Read more about the crew:
+ Padalka: Space Veteran Commands Next Station Crew
+ Fincke: NASA Astronaut Takes a Step Toward Mars
+ Kuipers: Dutch Doctor Bound for Space Station 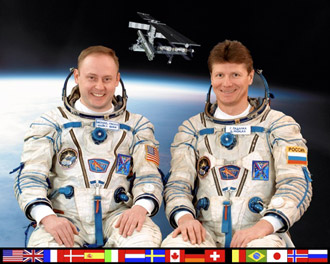 Image above: Expedition 9 Flight Engineer and NASA ISS Science Officer Mike Fincke (left) and Commander Gennady Padalka. Image credit: NASA.
Padalka and Fincke arrived at the Station on April 21 aboard the ISS Soyuz 8 spacecraft with European Space Agency (ESA) Astronaut André Kuipers. After more than a week of joint operations and handover activities, Padalka and Fincke officially took command of the Station on April 29 when Expedition 8 Commander Michael Foale and Flight Engineer Alexander Kaleri left the Station. Expedition 8 and Kuipers returned to Earth that same day aboard the ISS Soyuz 7 spacecraft. Kuipers' 11-day mission to the ISS was part of a commercial agreement between ESA and the Federal Space Agency of Russia. Expedition 9 will spend the next 5-1/2 months on the Station. In addition to maintaining ISS operations and continuing scientific research, Expedition 9's tour of duty features spacewalks and the arrival of two Progress resupply vehicles. 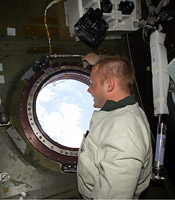 Padalka is a colonel in the Russian air force. He had one previous space flight during which he spent 198 days aboard the Russian Mir space station in 1999. Fincke is a lieutenant colonel in the U.S. Air Force, and Expedition 9 is his first trip to space. He is excited about the opportunity. "In life, I don't think we always get a chance for our dreams to come true," he said during a preflight interview. "But I can tell you, right here and right now, that I'm living my dream. I've always dreamed of being an astronaut, and now I'm getting a chance." Continued on Page 2: Science and End of Mission
› Back To Top