Christmas in the Heavens
Much like the shepherds and wise men during the first Christmas, people around the world had their attention turned toward the heavens 35 years ago this week, when the Apollo 8 crew delivered its famous Christmas Eve broadcast from lunar orbit.

To mark the occasion, they sent Christmas greetings and live images back to their home planet and read from the Book of Genesis. Borman closed the message with the words "good night, good luck, a Merry Christmas, and God bless all of you -- all of you on the good Earth."

It is estimated that as many as one billion people watched the historic broadcast or listened on the radio.

Apollo 8 launched from Earth on Dec. 21 and entered lunar orbit on Christmas Eve. The Apollo 8 crewmembers ended their history-making journey when they splashed down in the Pacific Ocean on Dec. 27. Eight more Apollo missions would visit the Moon, with six of them landing on its surface. 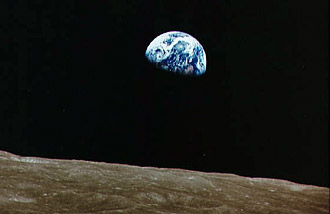 This is an example of one of the breathtaking images of the Moon and the Earth taken by the Apollo 8 crew.
The Skylab 4 crew was the next set of astronauts to spend Christmas in space, in 1973. To give Skylab a touch of the holiday season, Commander Gerald Carr, Pilot William Pogue and Scientist Edward Gibson made a Christmas tree with food cans.

It would be 22 years before another American would spend Christmas outside Earth's atmosphere. Astronaut John Blaha celebrated the holiday in orbit aboard the Russian Mir space station in 1996. His crewmates were Russian Cosmonauts Valery Korzun and Alexander Kaleri, who will spend his second Christmas in space this year as a member of the Expedition 8 crew aboard the International Space Station. Kaleri's Expedition 8 crewmate is Astronaut Michael Foale, who will also spend his second Christmas in space. In 1999, Foale was a member of STS-103, the first and only Space Shuttle mission to fly during the holiday.

A Christmas tree made out of cans by the Skylab 4 crew.
Foale and his STS-103 crewmates gave NASA and the world a Christmas present that is still giving to the scientific community. After three consecutive days of spacewalks to make repairs and upgrades, they returned the Hubble Space Telescope to service on Christmas Day. Hubble had been in hibernation since the loss of its fourth gyroscope, designed to enable the telescope to point precisely at distant astronomical targets for scientific observations.

Each of the seven STS-103 crewmembers, which included astronauts from the United States, France and Switzerland, called down holiday wishes from space in several languages after Space Shuttle Discovery departed Hubble.

The first Christmas aboard the International Space Station occurred in 2000 with the Expedition One crew. Astronaut Bill Shepherd and Cosmonauts Yuri Gidzenko and Sergei Krikalev spent a quiet Christmas Day opening gifts and talking to their families.

Two more crews have spent Christmas on the ISS, Expedition 4 and 6, in similar ways with a few exceptions. Expedition 4 celebrated with turkey and other traditional holiday foods. And the Expedition 6 crew assembled and frosted a cake shaped like a candy cane. Santa delivered the gifts to the Station with assistance of the Space Shuttle, Soyuz and Progress spacecraft.