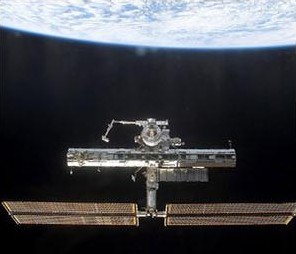 It's been a long day, and your clothes show it.

After you change into something more comfortable (and clean), you realize the clothes you just took off could really use a good wash. Unfortunately, there's no washing machine within 250 miles. That's just a typical day of life onboard the International Space Station (ISS). While the Space Station does offer more amenities than did earlier spacecraft, such as the best free gym off the planet, one of the many things it still does not have is a way to wash clothes. So, what do you do with your dirty underwear when you're orbiting the Earth aboard a spacecraft with no washing machine? Here are four choices.

Option One: Wear It Again 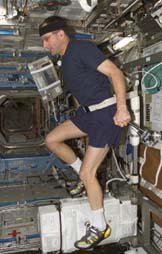 This is the most common answer. When you're going on a long trip, it's hard to pack enough clothes, but when you're about to spend several months on the Space Station, it's literally impossible. Packing enough underwear for three members of an ISS Expedition crew to have a clean pair for every day of a 6-month stay would mean launching at least 540 pairs of underwear into orbit. Picture how big your dresser would have to be to hold all that. There's just no room for it on the Station. Plus, when it costs between $5,000 and $10,000 per pound to launch it into space, that becomes some very expensive underwear. As a result, astronauts have to stretch out how long they wear the underwear that they can take with them in order to make it last for their whole stay. On the Russian Space Station Mir, that meant that cosmonauts generally had to wear their underwear for up to a week before it was time to put on a clean pair.

On the International Space Station, things are a little bit better. In his series of "Space Chronicles," ISS Expedition Six Science Officer Don Pettit wrote that he changes his underwear once every 3 or 4 days. That's not quite as bad as it sounds, since clothes don't get dirty as quickly on the Space Station as they do on Earth. Astronauts on the Station are living in a controlled environment, so the temperature stays at a constant, comfortable level. And when everything around you is virtually weightless, you don't have to exert yourself physically the same way you do in the gravity on Earth's surface. However, astronauts do have to spend a substantial amount of time each day exercising so that their bodies don't atrophy in microgravity, so they do still get a workout. And, underwear isn't the only item of clothing that gets worn longer than usual. In an interview in February, Pettit said that he was still wearing the same pair of shorts he had been wearing since he first arrived on the Station - in November! Even though they have more shorts to change into, Expedition Six Commander Ken Bowersox also has a favorite pair he chooses to wear frequently. Even though there's no laundry facility on the Station, Bowersox even figured out a way to wash his shorts using a plastic bag.

Option Two: Turn It Into A Shooting Star 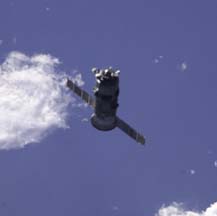 When it's time for the Space Station crew to return to Earth at the end of their stay, the Space Shuttle usually serves as their moving van to carry them back home. In addition to the ISS crew and their personal effects they are bringing back with them, the Shuttle also has to carry home science experiments that have been completed at the Station so that new ones can be performed there. As a result, there's not a lot of free space on the Shuttle for the ride home, and so nobody wants to use that space to carry several months worth of dirty underwear. So what happens to it, then?

To make sure that the ISS crew has enough food, water, and other necessities for their stay in space, the Russian Space Agency launches unmanned Progress ships to carry supplies to the Station. The Progress is a nonreusable spacecraft, good for a one-way trip to the Space Station. Once it is there and the Station crew has unloaded the supplies, the Progress is then loaded up with trash, including dirty laundry. Since only a limited number of Progress crafts are sent to ISS each year, the dirty clothes can sit around on the Station for a while before they can be disposed of. The Progress is then undocked from the Station and "de-orbited," placed on a course that causes it to burn up in Earth's atmosphere over the Pacific Ocean.

Option Three: Grow Plants With It

When Science Officer Pettit recently decided to try and grow some tomato and basil seeds he had aboard the Station, he had a problem. Since there's no soil, he had to figure out some other way to grow the plants. In his Space Chronicles, Pettit wrote, "To construct my planter, a spherical core is needed. An old pair of underwear worked well. We have supplies on Station sufficient to change our underwear perhaps once every 3 to 4 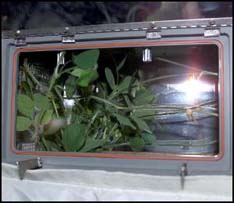 days, so I figured there might be a few nutrients in there as well. An old pair of underwear was folded into a sphere and held in place with a few well-placed stitches using needle and thread from our sewing kit." For the outside of the planter, he sewed some Russian space toilet paper to the outer surface of the underwear. "This toilet paper is not like what you normally think of as toilet paper," Pettit wrote. "It consisted of two layers of coarsely woven gauze, 4 by 6 inches in dimension sewn together at the edges with a layer of brown tissue sandwiched in-between. It works very well for its intended purpose. It also makes a wonderful sprouter." After Pettit solved a problem that was causing the seeds to stay too cold to germinate, the seeds sprouted in the underwear-toilet paper planter within 2 days.

Option Four: Feed It To Bacteria

This one isn't really an option right now, but it might be in the future. While the Mir station was still in orbit, Russian scientists were already working on a new solution to the problem of dirty underwear being stored on the Station for months at a time. The scientists began designing a system that would use bacteria to digest the astronaut's cotton and paper underpants. The researchers said that it was even possible that the methane gas given off when the bacteria ate the underwear could be used to help power the spacecraft. The system would even be able to be used to dispose of some other waste on the Station, as well. While the system was never completed for use on Mir (researchers said it could take up to a decade to find the right combination of bacteria), it may be an option for people living in space in the future.

So while astronauts have a well-deserved reputation for being smart, well-educated, hardworking, physically fit, sociable, dedicated people, now you know their dirty little secret-despite their mothers' advice, they don't always wear clean underwear.

Courtesy of NASA's Aerospace Technology Enterprise
Published by NASAexplores: April 10, 2003
› Back To Top