Can People Go to Mars?
Space radiation between Earth and Mars poses a hazard to astronauts. How dangerous is it out there? NASA scientists are working to find out.

NASA has a mystery to solve: Can people go to Mars, or not?

"It's a question of radiation," says Frank Cucinotta of NASA's Space Radiation Health Project at the Johnson Space Center. "We know how much radiation is out there, waiting for us between Earth and Mars, but we're not sure how the human body is going to react to it."

NASA astronauts have been in space, off and on, for 45 years. Except for a few quick trips to the moon, though, they've never spent much time far from Earth. Deep space is filled with protons from solar flares, gamma rays from newborn black holes, and cosmic rays from exploding stars. A long voyage to Mars, with no big planet nearby to block or deflect that radiation, is going to be a new adventure. 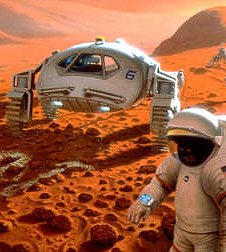 NASA weighs radiation danger in units of cancer risk. A healthy 40-year-old non-smoking American male stands a (whopping) 20% chance of eventually dying from cancer. That's if he stays on Earth. If he travels to Mars, the risk goes up.

The question is, how much?

"We're not sure," says Cucinotta. According to a 2001 study of people exposed to large doses of radiation--e.g., Hiroshima atomic bomb survivors and, ironically, cancer patients who have undergone radiation therapy--the added risk of a 1000-day Mars mission lies somewhere between 1% and 19%. "The most likely answer is 3.4%," says Cucinotta, "but the error bars are wide."

The odds are even worse for women, he adds. "Because of breasts and ovaries, the risk to female astronauts is nearly double the risk to males."

Researchers who did the study assumed the Mars-ship would be built "mostly of aluminum, like an old Apollo command module," says Cucinotta. The spaceship's skin would absorb about half the radiation hitting it.

"If the extra risk is only a few percent ... we're OK. We could build a spaceship using aluminum and head for Mars." (Aluminum is a favorite material for spaceship construction, because it's lightweight, strong, and familiar to engineers from long decades of use in the aerospace industry.)

The error bars are large, says Cucinotta, for good reason. Space radiation is a unique mix of gamma-rays, high-energy protons and cosmic rays. Atomic bomb blasts and cancer treatments, the basis of many studies, are no substitute for the "real thing."

The greatest threat to astronauts en route to Mars is galactic cosmic rays--or "GCRs" for short. These are particles accelerated to almost light speed by distant supernova explosions. The most dangerous GCRs are heavy ionized nuclei such as Fe+26. "They're much more energetic (millions of MeV) than typical protons accelerated by solar flares (tens to hundreds of MeV)," notes Cucinotta. GCRs barrel through the skin of spaceships and people like tiny cannon balls, breaking the strands of DNA molecules, damaging genes and killing cells.

Astronauts have rarely experienced a full dose of these deep space GCRs. Consider the International Space Station (ISS): it orbits only 400 km above Earth's surface. The body of our planet, looming large, intercepts about one-third of GCRs before they reach the ISS. Another third is deflected by Earth's magnetic field. Space shuttle astronauts enjoy similar reductions.

Apollo astronauts traveling to the moon absorbed higher doses--about 3 times the ISS level--but only for a few days during the Earth-moon cruise. GCRs may have damaged their eyes, notes Cucinotta. On the way to the moon, Apollo crews reported seeing cosmic ray flashes in their retinas, and now, many years later, some of them have developed cataracts. Otherwise they don't seem to have suffered much. "A few days 'out there' is probably safe," concludes Cucinotta. 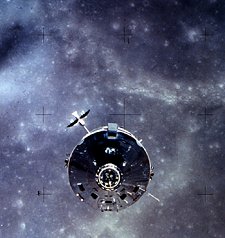 Right: Apollo command modules were well-enough shielded for quick trips to the Moon and back. [More]

But astronauts traveling to Mars will be "out there" for a year or more. "We can't yet estimate, reliably, what cosmic rays will do to us when we're exposed for so long," he says.

Finding out is the mission of NASA's new Space Radiation Laboratory (NSRL), located at Brookhaven National Labs in New York. It opened in October 2003. "At the NSRL we have particle accelerators that can simulate cosmic rays," explains Cucinotta. Researchers expose mammalian cells and tissues to the particle beams, and then scrutinize the damage. "The goal is to reduce the uncertainty in our risk estimates to only a few percent by the year 2015."

Once the risks are known, NASA can decide what kind of spaceship to build. It's possible that ordinary building materials like aluminum are good enough. If not, "we've already identified some alternatives," he says.

How about a spaceship made of plastic?

"Plastics are rich in hydrogen--an element that does a good job absorbing cosmic rays," explains Cucinotta. For instance, polyethylene, the same material garbage bags are made of, absorbs 20% more cosmic rays than aluminum. A form of reinforced polyethylene developed at the Marshall Space Flight Center is 10 times stronger than aluminum, and lighter, too. This could become a material of choice for spaceship building, if it can be made cheaply enough. "Even if we don't build the whole spacecraft from plastic," notes Cucinotta, "we could still use it to shield key areas like crew quarters." Indeed, this is already done onboard the ISS. 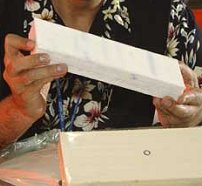 If plastic isn't good enough then pure hydrogen might be required. Pound for pound, liquid hydrogen blocks cosmic rays 2.5 times better than aluminum does. Some advanced spacecraft designs call for big tanks of liquid hydrogen fuel, so "we could protect the crew from radiation by wrapping the fuel tank around their living space," speculates Cucinotta.

Can people go to Mars? Cucinotta believes so. But first, "we've got to figure out how much radiation our bodies can handle and what kind of spaceship we need to build." In labs around the country, the work has already begun.