A Black Box for People
Developed for astronauts, a small device called the CPOD does for people what black boxes do for airplanes.

When planes have a problem, analysts can usually figure out what went wrong. They simply check the plane's "black box," which records exactly what was happening to the plane at the time.

Now, there's something similar for people. Under the leadership of Stanford University professor Greg Kovacs and engineers Carsten Mundt (NASA/Ames) and Kevin Montgomery (Stanford), researchers have developed a device that is like a black box or flight recorder for human beings.

Just as a plane's black box records crucial mechanical data, NASA's device, the CPOD (pronounced "see-pod"), keeps track of biological data, like changes in heart rate, the amount of oxygen in the blood stream, how the wearer is moving ... and much more. 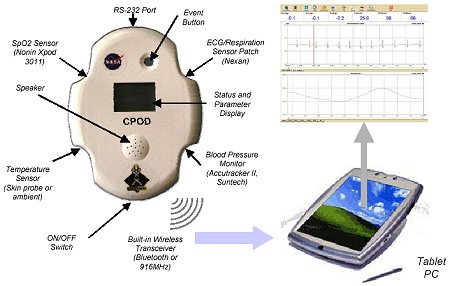 Above: Basic features of the CPOD. [More]

The CPOD, first envisioned by John Hines of NASA's Astrobionics Technology Program, was intended to make it easier to monitor the vital signs of astronauts in space. Right now, such a process involves hooking the astronauts up "with a whole bunch of wires to a huge rack of equipment." In some cases, says Mundt, the data are recorded on paper and entered into a laptop by hand.

The CPOD changes all that.

It's a compact, portable, wearable device -- a single piece of equipment that gathers a wide variety of vital signs. About the size of a computer mouse, a CPOD is worn around the waist. It's comfortable enough to be worn while sleeping. It's non-invasive. It takes only minutes to don. Importantly, it can track a person's physiologic functioning as they go about their normal routine -- they don't have to be tethered to some stationary device. It can store data for eight-hour periods for later downloading; alternatively, it can send it wirelessly, in real time, to some other device.

"This is a new tool," says Kovacs. "It allows monitoring of the body without invasion of the body --- without tethering the person down, letting them go about their normal business." 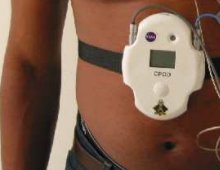 Right: A CPOD strapped onto a person. [More]

Such data would, of course, be invaluable to researchers trying to understand how the human body adapts to extreme conditions -- like space, the moon, or Mars. The ability to monitor astronauts so closely, as they work, and in real time, would also make the astronauts much safer.

For one thing, the CPOD could notice problems before the astronauts even became aware of them. "We have alarms set in our device," says Mundt. "If the heart rate goes, let's say, above 170, the CPOD would beep, and then the astronaut would know it's time to take it easy."

And, in the case of an emergency, the CPOD could provide vital signs within seconds-- and it could quickly stream that information back to doctors on Earth.

The CPOD typically tracks heart performance, blood pressure, respiration, temperature, and blood oxygen levels. Using three tiny accelerometers, it also tracks a person's movements -- it can tell whether they're running, for example, or spinning or tumbling.

And it can be reconfigured. If researchers choose, almost any kind of sensor could be plugged into the device. The CPOD could, for example, keep track of ambient air pressure, or monitor the concentrations of atmospheric gases. 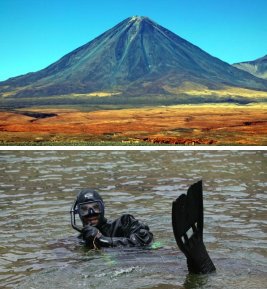 With such capabilities, the CPOD is likely to prove as important on Earth as it could be to conquering space.

Using the CPOD, EMT's at an accident scene could quickly gain information about a victim's condition. CPODs could monitor the blood oxygen levels of firefighters inside burning buildings. Physicians could use CPODs for "outcome monitoring," using them to track a patient's reactions to a particular procedure or drug. Athletes, like divers and mountain climbers, could use them to keep track of their exertion levels. The CPODs could help monitor pollution, and even treat soldiers on a battlefield.

Left: Divers wore CPODs while recently exploring one of the world's highest lakes, altitude 17,700 ft, at the top of Chile's Licancabur volcano. Data were relayed by satellite to Stanford University, "as it would be if the monitoring were for a medical situation in space," says Kovacs. The diver pictured is Rob Morris. Photo credit: A. Hock, G. Kovacs. [More]

"There's just tremendous opportunity for a box like this," says Kovacs.

Mundt believes that CPODs will be helping out in space in a matter of years. Right now, though, the researchers are still testing its performance in a variety of space-analog conditions.

Astronauts, for example, have worked with the CPOD on a NASA mission aboard the Aquarius, an underwater habitat located off the coast of Key Largo. The Aquarius is similar to the space station's living quarters, the Zvezda Service Module, and Mundt and his team wanted to test wireless streaming in that kind of "metal can" environment. "It's very similar to the space shuttle," said Mundt. "There's a lot of reflection of wireless signals, and lots of interference."

Below: A diver approaches the Aquarius undersea research laboratory. [More] 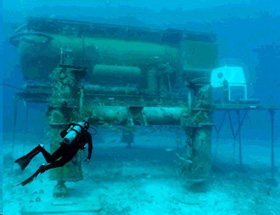 The CPOD has also been tested onboard the KC-135--NASA's "vomit comet" aircraft that achieves almost 30 seconds of weightlessness for passengers by flying high parabolic arcs. "The flights went really well!" says Kovacs. (See the movie.)

Next, Kovacs and colleagues plan to make the device smarter. They're in the process of adding software that can help diagnose problems by analyzing the massive amounts of data that the CPOD collects. Such software could hunt out correlations that might explain an anomaly. For example, if a person's heart rate suddenly spiked, such software could connect that to what was happening at the time: whether the person was exercising, or being still, for example.

The CPOD, says Kovacs, is an elegant job of putting the current state of the art in sensors in a compact, integrated package. "It's an incredibly versatile tool," he says. "It's a medical monitor that just about any doctor can use." And it can be used just about anywhere. Despite a CPOD's small size, he says, "it's a huge thing--a really huge thing."