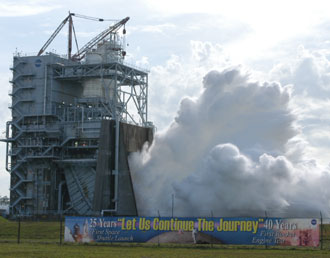 On April 23, 1966, the morning silence was broken by an earth-rattling roar that swept southern Mississippi and Louisiana into the Space Age.

That roar was the sound of the first rocket engine static test-firing at what is now NASA's John C. Stennis Space Center. The S-II-T tested April 23, 1966, was a cluster of five J-2 engines, the second stage of the Saturn V moon rocket.

When President John F. Kennedy made his historic 1961 announcement that the United States would put humans on the moon by the end of the decade, the plan called for a place to test the huge rocket engines.

Mississippi's influential Sen. John C. Stennis, for whom the center is named, supported the selection of his home state as the place to build the test facility. The site's water access was essential for transporting large rocket stages between the manufacturing plant at Michoud Assembly Facility in New Orleans, Stennis Space Center, Marshall Space Flight Center and Kennedy Space Center. The nearly 2,000-mile trip took the barges up and down the Tennessee River, the Mississippi River, the Atlantic Coast and across parts of the Gulf of Mexico.

The vast tracts of densely-forested land around the Hancock County site provided a natural acoustical buffer zone to shield surrounding communities from the rumble of the engine tests. That 125,000-acre buffer zone is now considered a national asset.

"Stennis is the last place in the country where we can test large engines or whole rocket stages," said NASA Administrator Michael Griffin during a recent visit to the center.

At the time the Mississippi Test Facility (as it was then called) was built, it was the largest construction project in Mississippi and the second largest in the United States.

Begun in May 1963, construction was complete and the center operational for rocket engine testing less than three years later, a phenomenal engineering feat. 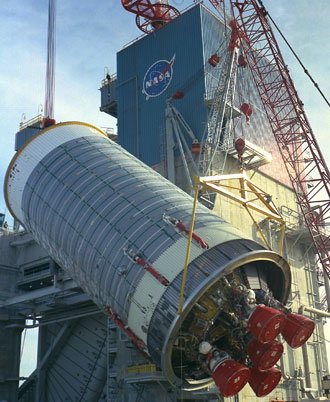 Image left: The first S-II-T booster to be tested at Stennis Space Center is installed on the A-2 Test Stand. Image credit: NASA.

Stennis tested each of the F-1 rocket engines that powered the first stage(S-IC) of the 364-foot-tall Saturn V launch vehicle for the Apollo missions. The F-1 measured 19 feet tall, produced 1.5 million pounds of thrust and weighed 10 tons. The dual-position test stand built to accommodate the mammoth vehicle measured 264 feet tall with an overhead crane reaching more than 300 feet. The stand remains one of the tallest structures in Mississippi.

When the five-engine cluster of F-1 engines was test-fired for the first time March 3, 1967, windows shattered in nearby communities. The engines gave the booster a total thrust of 7.5 million pounds, taking the vehicle to a height of about 36 miles and to a speed of about 6,000 mph.

Stennis Space Center’s vital role in proving the worthiness of the engines that propelled the Apollo program spawned the adage: If you want to go to the moon, first you have to go through Hancock County.

With its state-of-the-art test facilities, Stennis Space Center is also testing components for future-generation launch vehicles, maintaining a crucial role in the life cycle of NASA's propulsion systems. The center will continue to play a vital part in the nation's bold new mission to replace the space shuttle with a new spacecraft and its vision to return to the moon before the end of the next decade, paving the way for eventual journeys to Mars and worlds beyond.

Existing facilities at Stennis Space Center will play a key role as the new vehicles are developed. The stands where NASA tested the Apollo rocket stages and that launched our first journeys to the moon will be called upon for the next era of space exploration.

For more information, visit www.nasa.gov/centers/stennis/home/index.html.
› Back To Top