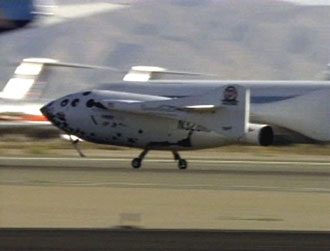 The privately-funded SpaceShipOne team has won the $10 million Ansari X-prize with a successful suborbital flight into space today by pilot Brian Binnie.

Image left: SpaceShipOne touches down in the Mojave Desert after its prize winning flight on October 4, 2004. Image from Ansari X-Prize Webcast, via NASA TV. Click for larger image

The X-Prize awards $10 million to the first team to launch a privately-funded spaceship able to carry three people or equivalent weight to 100 kilometers, return safely to Earth and repeat the launch with the same ship within two weeks. SpaceShipOne -- designed by Burt Rutan and funded by Microsoft co-founder Paul Allen -- made the first flight on Wednesday, September 29.

Archived webcasts of the two flights are available:

"Burt Rutan, Paul Allen and the rest of the SpaceShipOne team are to be congratulated for this important achievement. They successfully demonstrated a new human spacecraft, a new propulsion system and a new high-altitude airborne launch platform," said NASA Administrator Sean O'Keefe. "The spirit of determination and innovation demonstrated today show that America is excited about a new century of exploration and discovery. We wish the SpaceShipOne team continued success and many more safe flights," he added.

Aboard the International Space Station 230 miles up, the Expedition 9 crew, made up of NASA astronaut Mike Fincke and Russian Cosmonaut Gennady Padalka, noted that for a few minutes this morning, they were joined in space by SpaceShipOne pilot Brian Binnie. "From Gennady and myself and the International Space Station team, congratulations on a job well done, and we're really glad SpaceShipOne returned safely," said Fincke.
› Back To Top