Music to Wake Up By 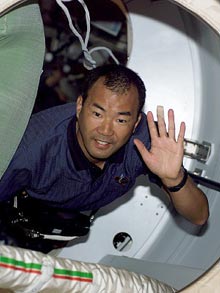 When Discovery astronauts Steve Robinson and Soichi Noguchi woke up to prepare for the second spacewalk of the STS-114 Return to Flight mission, they got a little musical inspiration from Mission Control in Houston. CAPsule COMmunicator (CAPCOM) Shannon Lucid radioed the crew with Dire Straits' "Walk of Life," in honor of the duo's upcoming repair work on the International Space Station.

Image to right: STS-114 Mission Specialist Soichi Noguchi of Japan was awakened during the STS-114 mission by a school chorus that included his own children.

"What a great day to go do a walk of life," said Robinson, who happens to play guitar in the astronaut rock band, Max-Q (Meet Robinson and others in the Astronaut Flight Lounge). "I like that line in there: 'You got the action, and you got the motion.'" A few days later, Houston cued up "Come On, Eileen" by Dexy's Midnight Runners, in honor of Commander Eileen Collins. (STS-114 Audio Page)

These are just the latest examples of a NASA tradition that stretches all the way back to the Gemini days in the mid-1960s. NASA's History Office has put together a comprehensive look at NASA's wakeup calls, including the lists of the hundreds of tunes sent to orbit. ( + View PDF: Chronology of Wakeup Calls)

Picked by flight controllers or by crewmembers' friends and family members, most wakeup calls are musical, but sometimes include dialog from movies or TV shows. The playlist is eclectic, ranging from rock, country, classical, bluegrass and jazz, to children's' choruses and songs from the countries of international crewmembers.

Astronaut Kay Hire, who was CAPCOM for STS-79, points out that the calls offer "an opportunity for levity and a bit of shared camaraderie. It tends to stand out as a human element in an otherwise complex technical enterprise." 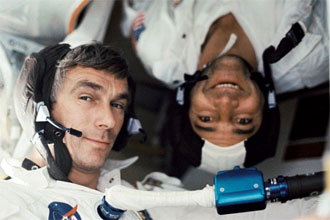 Image left: Apollo 17 astronauts Gene Cernan, left, and Jack Schmitt, photographed by their crewmate Ron Evans. The crew heard tunes from The Doors and The Carpenters.

Several themes have prevailed over the years. First there are the obvious references to space flight and the unique vistas it can offer. Louis Armstrong's "What a Wonderful World" has been heard on multiple occasions, as has Tom Petty's "Free Fallin'," the Beatles "Here Comes the Sun," and various versions of "Fly Me to the Moon."

Military marches and college fight songs are also popular. Take the STS-8 mission in 1983, which featured the fight songs of Georgia Tech, Illinois, Penn State and North Carolina, along with "Semper Fidelis" in honor of astronaut Brian O'Connor, a Marine Corps officer.

Movie themes are big too. Strauss' "Thus Spake Zarathustra," known as the theme from "2001: A Space Odyssey," was popular with Apollo crews, and several Shuttle missions have heard the strains of "Star Wars" and "Star Trek." Patrick Stewart, "Star Trek's" Captain Jean-Luc Piccard, recorded a special message announcing the "voyage of the Space Shuttle Atlantis" as the STS-44 crew explored the "final frontier" in 1991. And in 1988, comedian Robin Williams shouted "Gooooooood Morning Discovery!" in a reference to his role in "Good Morning Vietnam."

Astronauts spending the holidays away from their families have been repeatedly serenaded with "I'll Be Home for Christmas" and other yuletide tunes. Many crews have also lightened the mood with parodies and comedy bits, like the STS-2 crew, who heard The Muppets' "Pigs in Space" routine in 1981. One astronaut, Ron McNair, heard his own tenor sax playing on orbit, when Mission Control played tunes by his group "Contraband." 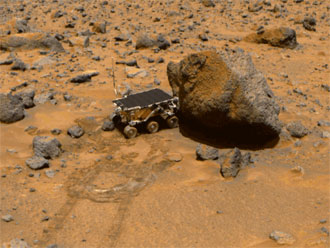 Image right: The Sojourner rover on the Mars Pathfinder mission "heard" its own set of wakeup tunes.

There are specific lyric references, like the line "Good morning, America, how are you," from the song "City of New Orleans" played to the Apollo 17 crew in their Command Module "America." That same crew heard the Doors "Light My Fire" when it was time to burn engines to leave lunar orbit, and also heard The Carpenters "We've Only Just Begun." That was played to show that the last lunar mission would not be the end of lunar exploration.

The Carpenters were also featured during Skylab 4, with "On Top of the World" joining an eclectic playlist which included Elvis Presley's "Burning Love," a Rachmaninoff piano concerto and Isaac Hayes' theme from "Shaft."

Wakeup calls haven't been limited to human ears. Robotic explorers on the Red Planet have been "hearing" their own music since 1997, when mission controllers at NASA's Jet Propulsion Laboratory played "The Final Frontier (Theme from 'Mad About You')" for Mars Pathfinder and the Sojourner rover. Rover-themed hits like "Let the Good Times Roll" and "Love Me Like a Rock" followed. The tradition has continued with the Spirit and Opportunity rovers, from the B-52's "Roam" to Kansas' "Dust in the Wind," played as Spirit tried to capture dust devils spinning across the surface.

There's no doubt the tradition will continue. And with NASA's future plans, "Fly Me to the Moon" should return to the top of the astronaut charts.

NASA History Office
› Back To Top