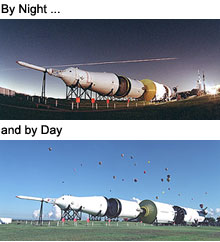 It almost launched men to the moon on Apollo 18. Now the Saturn V rocket on display near the entrance of Johnson Space Center is getting some restoration work by the Smithsonian Institution's National Air and Space Museum.

Image left: A Saturn V rocket on display at Johnson Space Center, Houston. Both images were captured during special events. In the top view, the bright streak in the sky is Space Shuttle Columbia returning to Earth at the end of STS-93 in 1999. The bottom photo was taken during the Ballunar Festival at JSC in 2000. The bright dots in the sky are hot-air balloons.

The 363-foot launch vehicle has been on display at JSC since 1977, a year before it formally became part of the Smithsonian collection. The restoration should add many years to the rocket's life.

Some of the rocket's external surfaces need attention, and corrosion has affected parts of the vehicle. Excessive moisture, poor drainage and small animals that have found shelter inside the Saturn V have added to its problems.

A grant from the Save America's Treasures of the National Park Service and the National Trust for historic preservation could provide $1.25 million for the work. If remaining matching funds can be raised, the project is scheduled for completion in December.

The Saturn V took the first humans around the moon in Apollo 8 in 1968. They were used in all lunar landing missions and to carry Skylab into orbit in 1973. Three Saturn Vs survive, but only the one at JSC is made up entirely of rocket stages intended for flight. Three planned moon flights, Apollo 18, 19 and 20, were canceled.