Rocco Petrone, 1926-2006
Rocco Petrone, a pioneer of America’s space program, passed away on August 24. He was 80. Petrone was instrumental in the achievement of the first voyages to the moon, serving as Director of Launch Operations at NASA's Kennedy Space Center from July 1966 until September 1969 and subsequently as NASA's Apollo Program Director. From 1973 to 1974, Petrone also was director of NASA's Marshall Space Flight Center. 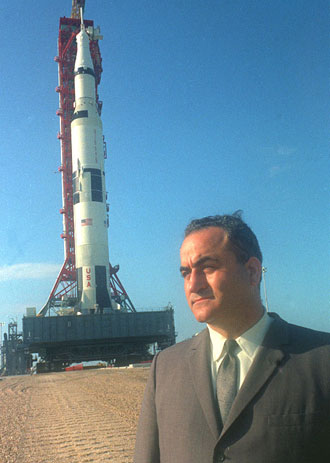 Image left: Marshall's third Center Director Rocco A. Petrone stands in front of a Saturn V rocket. Petrone personally supervised the Apollo 11 Mission and then became Director of the Apollo program in 1969 before coming to Marshall. At Marshall he continued to direct the manned space flight programs. Click on image for high resolution image. Image credit: NASA.

The son of Italian immigrants, Petrone graduated from the U.S. Military Academy at West Point in 1946 and attained the rank of Lieutenant Colonel. He also earned a master's degree in mechanical engineering from the Massachusetts Institute of Technology in 1951 and received an honorary doctorate from Rollins College. During two decades with the U.S. Army, Petrone took part in developing the Redstone rocket, the first U.S. ballistic missile and the vehicle used to propel America's first astronauts, Alan Shepard and Virgil "Gus" Grissom on their suborbital missions.

At NASA, Petrone presided over the development of the Saturn 5 lunar launch vehicle and launch operations, what he dubbed the "five-month marathons," leading up to each launch. In a Washington Post feature, shortly before the first moon landing, Petrone was described as "a broad-shouldered tree of a man who in his line of work is treated with the same mixture of awe and respect football players give Vince Lombardi."