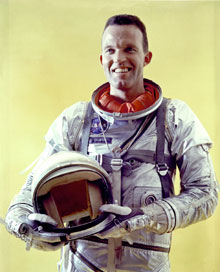 The world knew him as Leroy Gordon Cooper, Jr., a space pioneer who set endurance records in both his Mercury Faith 7 flight and his Gemini 5 mission. To his fellow astronauts in the "Original Seven," he was all that too, but he was also their brother -- "Gordo."

Cooper died Oct. 4 at his California home at the age of 77. He piloted the sixth and last flight of the Mercury program (Faith 7, in 1963) and later commanded Gemini 5, becoming the first man to make a second orbital flight. A memorial service is planned for Friday, October 15 at NASA's Johnson Space Center in Houston, Tex. (+ Read Full Obituary).

"Gordo was one of the most straightforward people I have ever known. What you saw was what you got," said fellow Mercury astronaut and former U.S. Senator John Glenn, in a statement released by the Astronaut Scholarship Foundation.

Another of the "Original Seven," Wally Schirra added, "We seven were bonded like brothers, maybe even closer if that's possible."

Other veterans of that groundbreaking era of exploration recalled Cooper's "can-do" spirit.

"He never said 'you can't do it.' He was gung ho on everything," said Norris Gray, the NASA Fire Chief and Emergency Preparedness Officier during the Mercury days. Sam Beddingfield, then Mechanical Engineer for Project Mercury added, "He knew what he was doing and could always make things work." 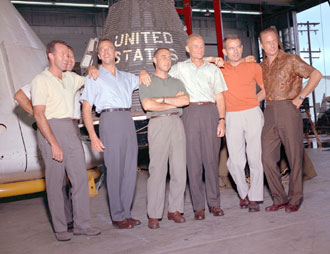 "Gordo was his own wonderful guy," said Dr. Christopher C. Kraft, flight director in the Mercury days. Kraft praised Cooper as "an excellent test pilot," but also remembered his lighter side.

"Walt {Williams, then head of flight operations} and I were in his office at the Cape one Sunday afternoon," said Kraft. "We were talking with each other, and a sudden roar came upon us. The roar was a jet airplane diving onto the Cape at a very high rate of speed, which was forbidden. We looked out the window to see none other than Gordo and his F-101."

Kranz describes arriving in Florida to report to work for the first time at Mercury Control on Cape Canaveral. "After the plane rolled to a stop ... a shiny new Chevrolet convertible wheeled to a halt just beyond the wingtip. An Air Force enlisted man popped out, saluted, and held open the car's door for a curly-haired guy in civilian clothes, a fellow passenger who deplaned ahead of me," writes Kranz.

The curly-haired man offered Kranz a ride to the Cape, and he hopped in. "After clearing the plane," Kranz writes, "he peeled into a 180-degree turn and raced along the ramp for 100 yards, my neck snapping back as he floored the Chevy. I had never driven this fast on a military base in my life. I was thinking I had hitched a ride with a madman, or at least someone who apparently had no concern about being pulled over the Air Police for speeding and breaking every regulation in the book."

Kranz continues: "Hitting the highway, he made a wide turn and a hard left, burning rubber. In no time, he had the needle quivering between eighty and ninety miles an hour. After a joyful cry of 'Eeeeee hah,' he turned and offered his hand, saying, 'Hi, I’m Gordo Cooper.' I had just met my first Mercury astronaut.

"I thought of that handshake often in the many years that followed. Mercury worked because of the raw courage of a handful of men like Cooper, who sat in heavy metal eggcups jammed on the top of rockets, and trusted those of us on the ground."

The best way to sum up 'Gordo' may be with his own words, spoken in his 70s, when he was still designing and testing aircraft: "I get cranky if I don't fly at least three times a month."