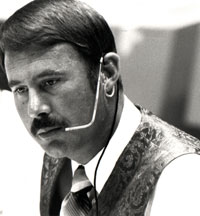 Puddy, whose 31-year career with NASA included 22 years as a key leader of human space flights at the Johnson Space Center (JSC), died Nov. 22 in Houston following a lengthy illness. He was 67.

Puddy joined NASA in 1964 and went on to become the agency's 10th flight director, calling the shots from the Mission Control console once occupied by NASA legends like Chris Kraft and Gene Kranz.

"Don's leadership as a flight director was critical during our transition from Apollo through the early Space Shuttle flights," said Milt Heflin, Chief of the JSC Flight Director Office. "His diverse talents allowed him to serve NASA and the country in many capacities."

He led teams during the history-making Apollo Program, as well as the three long-duration Skylab missions in 1973 and 1974. Puddy also was a flight director during the Apollo-Soyuz Test project in 1975. That mission joined a Russian and U.S. crew in orbit, and helped pave the way for the international cooperation that would lead to the Shuttle-Mir program and the International Space Station.

Puddy was also in the flight director's chair on the afternoon of April 14, 1981 when the Space Shuttle Columbia touched down at Edwards Air Force Base in California, bringing a successful close to the first Shuttle mission, STS-1.

Following his work in Mission Control, Puddy held other leadership roles at JSC, NASA's Ames Research Center in California, and Headquarters in Washington. He was responsible for creating and managing many project and aircraft safety procedures, and -- folowing up on his work with Apollo-Soyuz -- was instrumental in early joint collaboration between the U.S. and Russian space programs.

Puddy's contributions to the space program were recognized by numerous awards, including the Presidential Medal of Freedom and the NASA Outstanding Leadership Medal.

A native of Oklahoma, Puddy was inducted into the Oklahoma Aviation and Space Hall of Fame in 2002. 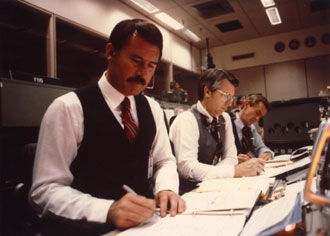 Image above: Puddy at the flight directors console during a training session just weeks before the launch of Columbia on the first Space Shuttle mission in 1981. Click for larger image. Photo credit: NASA.

"I had the honor of presenting Don at his induction into the Hall of Fame," said Heflin. "We are from the same part of Oklahoma, and I felt especially privileged to pay tribute to him that day. He was my friend and my mentor, providing me guidance and encouragement to meet the challenges of working in Mission Control."

Flags over the Mission Control Center at JSC were flown at half staff to honor Puddy's memory.

Puddy is survived by his high school sweetheart and wife of 48 years, Dana. He also is survived by their three sons, Mike, Doug and Glenn, and six grandchildren.