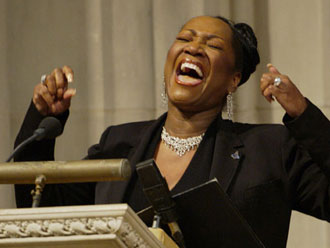 Image Left: Patti LaBelle performs "Way Up There" at the Columbia memorial service at the National Cathedral in Washington.Photo Credit: NASA/Renee Bouchard

R & B legend Patti LaBelle has been nominated for a Grammy Award for "Way Up There," the stirring anthem she performed to honor the seven fallen heroes of the Space Shuttle Columbia.

The song, written by LaBelle's long time collaborator Tena R. Clark, was originally commissioned by the NASA Art Program to celebrate the Centennial of Flight in 2003. But it took on a powerful new meaning for the NASA family when LaBelle performed it at the Columbia memorial service at the National Cathedral in Washington on February 6, 2003.

LaBelle reprised the performance two months later at the Houston Astros' opening day ceremonies, where the team honored the STS-107 crew by wearing mission patches on their uniforms.

In the song's chorus, LaBelle sings, "Way up there, peace remains. Silence thunders and angels sing. Imagination and amazing grace bring us closer to our home in space."

Watch her performance at the memorial service: