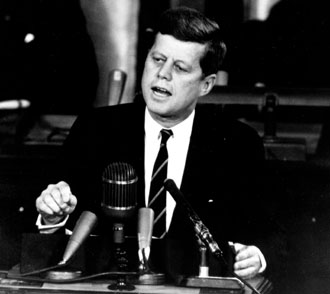 In a time of uncertainty at home and abroad, an American president proposes bold new steps in the exploration of space.

He calls for "longer strides" which "may hold the key to our future here on Earth." He touts the potential of "even more exciting and ambitious exploration of space, perhaps beyond the moon, perhaps to the very end of the solar system itself."

The year is 1961. The president is John F. Kennedy. But the words ring true today, as NASA once again aims for new frontiers with the Vision for Space Exploration.

Kennedy's "Special Message to Congress on Urgent National Needs" came on May 25, just three weeks after Mercury astronaut Alan B. Shepard became the first American in space. Delivered at the height of the Cold War with the Soviet Union, the speech is best known for Kennedy's audacious challenge to NASA and America:

"I believe that this nation should commit itself to achieving the goal, before this decade is out, of landing a man on the moon and returning him safely to Earth."
(Kennedy's Speech: + HTML Excerpt, + PDF Excerpt, + Full Text)

NASA fulfilled that goal on July 20, 1969, when Apollo 11's lunar module Eagle  touched down in the Sea of Tranquility, with Neil Armstrong and Buzz Aldrin aboard. A dozen men would walk on the moon before the Apollo program ended. The last of those men, Gene Cernan, left the desolate lunar surface with these words:

"We leave as we came and, God willing, as we shall return, with peace and hope for all mankind." 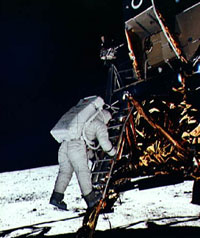 Now, NASA is indeed looking to return to the moon, as well as planning new journeys to Mars and beyond. Engineers are already developing the new vehicles that will carry American astronauts to the lunar surface before the end of the next decade. On the robotic front, the Lunar Reconnaissance Orbiter will launch in 2008, scouting for resources and carrying a second spacecraft that will crash into the moon to look for water ice.

Much has changed in the 45 years since Kennedy's speech. Our Cold War Soviet rivals are now our Russian partners on the International Space Station. And the technological feats Kennedy helped initiate have spawned countless tangible benefits on Earth. Medical technologies, weather forecasting, computer technology and telecommunications can all trace their origins to the space program. (+ NASA Spinoffs)

What hasn't changed is the spirit of exploration and discovery.

"Mankind is drawn to the heavens for the same reason we were once drawn into unknown lands and across the open sea," said President Bush, announcing the Vision in 2004. "We choose to explore space because doing so improves our lives, and lifts our national spirit."