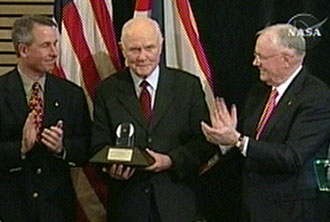 Image left: John Glenn, center, holds the piece of moonroock presented to him as an Ambassador of Exploration. Cheering him on are Apollo 11 commander Neil Armstrong, right, and STS-114 astronaut Steve Robinson, left. Credit: NASA TV.

On February 20, 1962, John H. Glenn, Jr., became the first American to orbit Earth. On the 44th anniversary of his historic mission, NASA presented Glenn with an Ambassador of Exploration Award in honor of this achievement.

Astronauts involved in 12 missions over 43 years were on hand at the ceremony at The Ohio State University. Before Glenn took the stage, he was honored in speeches by Apollo 11 moonwalker Neil Armstrong and Return to Flight spacewalker Steve Robinson.

Glenn shared anecdotes about his missions, and said it was important that future generations could draw inspiration from his award, a sample of lunar rock which will be on display at the university. "The moon is not even the end of things," said Glenn. "We're going farther than that."

Glenn's Mercury-Atlas 6 mission established the U.S. as a strong contender in the space race with the Soviet Union, which had launched the world’s first spacecraft, Sputnik, in October 1957 and had also sent the first human, Yuri Gagarin, into space in April 1961. With Glenn's orbital mission, NASA was at last seen as being on par with the Soviet program. The mission also made Glenn an instant hero. 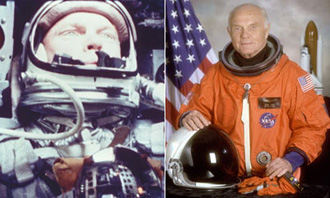 Image left: Astronaut John Glenn, who became the first American to orbit the Earth, is pictured in the Friendship 7 spacecraft (left) and in this 1998 official portrait as a crewmember of STS-95 shuttle mission. Photo Credit: NASA.

At the age of 77 in his fourth and final term as a U.S. Senator, Glenn again made history by becoming the oldest human to fly in space as a crewmember of the Space Shuttle Discovery. During this 1998 shuttle mission, Glenn conducted a series of investigations into the physiology of the human aging process.

But despite his long Senate service and historic shuttle flight, Glenn will always be remembered as the first American to orbit the Earth during those tentative, challenging, daring days when humans were just beginning to venture beyond the atmosphere that had nurtured them since the species began.

While Glenn's flight on Friendship 7 was a glorious national triumph, problems arose that could have spelled disaster. The first was a failure of the automatic control system.

A scheduled 30-minute test to determine whether Glenn could fly the capsule manually became a matter of life and death when the automatic system went out at the end of the first orbit.

"I went to manual control and continued in that mode during the second and third orbits, and during re-entry," Glenn recalled later. "The malfunction just forced me to prove very rapidly what had been planned over a longer period of time."

Another problem seemed even more serious -- telemetry indicated the spacecraft's heat shield was loose. It seemed possible that Glenn and the spacecraft would be incinerated on re-entry. 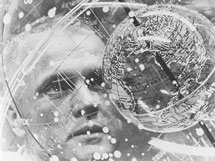 Glenn left the retrorocket pack in place to steady the heat shield during re-entry. "It made for a very spectacular re-entry from where I was sitting," he said. Big chunks of the burning material came flying by the window.

NASA is presenting the Ambassador of Exploration Award to the 38 astronauts who participated in the Mercury, Gemini, and Apollo space programs. The award consists of a sample of lunar rock encased in Lucite, part of the 842 pounds of samples brought back to Earth during the six Apollo lunar expeditions. Glenn's award will be displayed at the John Glenn Institute of Public Service and Public Policy in Columbus, Ohio.
+ Read more about the award.

Glenn was born in 1921 in Cambridge, Ohio. As a Marine aviator, he flew combat missions during WW II and the Korean War. He was selected as one of the original Mercury astronauts in April 1959. Glenn left the astronaut program in 1965, three years after he piloted the first U.S. orbital mission. He was elected to the Senate in November 1974, where he served four terms until his retirement in January 1999.

For Glenn's astronaut biography on the Web, visit: http://www.nasa.gov/centers/glenn/about/bios/glennbio.html