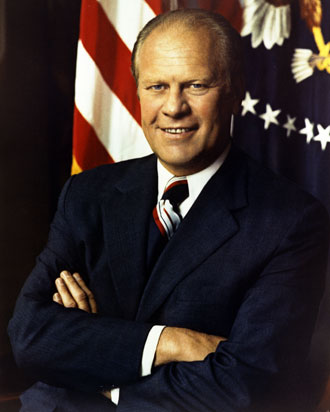 Today, our nation mourns the loss and reflects on the legacy of our 38th President, Gerald Ford.

President Ford will be remembered for his fundamental decency and his optimism about what our people can accomplish in the pursuit of ambitious goals, including the exploration of space.

On the occasion of our nation's bicentennial, Ford himself stated, "As we celebrate our bicentennial year of independence, the great American adventure continues. The hallmark of that adventure has always been an eagerness to explore the unknown, whether it lay across an ocean or a continent, across the vastness of space or the frontiers of human knowledge. Because we have always been ready to try new and untested enterprises in government, in commerce, in the arts and sciences and in human relations, we have made unprecedented progress in all of these fields…the American adventure is a continuing process … As we begin our third century there is still so much to be done." 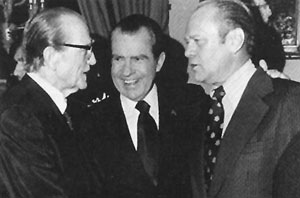 President Ford, who as a member of the House Select Committee on Astronautics and Space Exploration in 1958 helped draft the original Space Act that gave NASA its charter, was always a stalwart supporter of the space program.

During his presidency, he celebrated the successful Apollo-Soyuz Test Project mission, predicting "the day is not far off when space missions made possible by this first joint effort will be more or less commonplace." 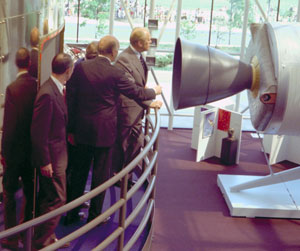 Image left: On July 1, 1976, President Gerald Ford opened the new Smithsonian National Air and Space Museum. The President is seen here standing at the entryway of the backup of the Skylab space station, which is on exhibit at the museum. The President with the Secretary of the Smithsonian, Dillon Ripley, and Director of the National Air and Space Museum, Michael Collins, look out at a portion of the Apollo-Soyuz spacecraft. Click image to enlarge. Image credit: NASA.

President Ford also saluted the landings of the twin Viking robotic explorers on Mars, saying on the occasion of the first landing, "Our achievements in space represent not only the height of technological skill, they also reflect the best in our country—our character, the capacity for creativity and sacrifice, and a willingness to reach into the unknown."

Gerald Ford served his country with tremendous dignity and energy, and his presence will be greatly missed.