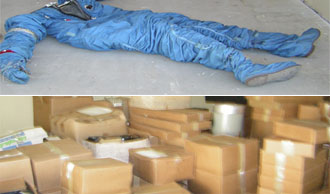 A recent venture into a long-locked room at the Cape Canaveral Air Force Station in Florida uncovered interesting artifacts of a by-gone era: retired spacesuits from Americans who trained in the 1960s to be space spies.

Two security officers were doing a check of a facility known as the Launch Complex 5/6 museum. NASA Special Agent Dann E. Oakland and Security Manager Henry Butler, of the company that oversees the museum, Delaware North Parks and Resorts, discovered a locked room -- and they had no key.

They eventually were able to unlock the door using a master key. With no power, the room had evidently not been accessed by people in many years. The officers used flashlights to explore the room and make their noteworthy find.

But Oakland and Butler weren't the first visitors. Rodents had clearly explored the room over the years. Still, two blue spacesuits were "complete and in remarkable shape," according to the suits' manufacturer, who examined them.

Investigators started looking into who owned the spacesuits. A NASA technician initially thought they were training suits from the end of the Gemini or beginning of the Apollo space programs. The manufacturer, however, determined that they were MH-7 training suits from a short-lived Cold War-era military program to put a manned reconnaissance station in space. 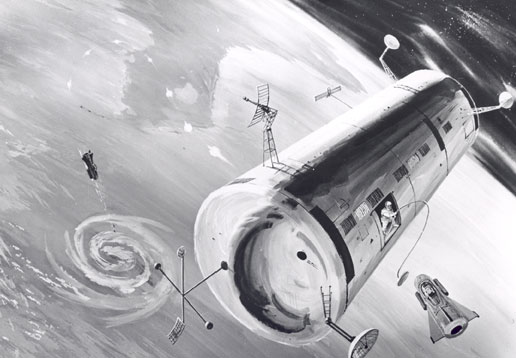 Image above: A 1960 conceptual drawing of the Manned Orbiting Laboratory. Click for larger image. Credit: NASA

Begun in 1964, the Manned Orbiting Laboratory program was an Air Force initiative that would have sent Air Force astronauts to a space station in a Gemini capsule. After spending a few weeks in orbit, the crew would undock and return to Earth. The Air Force abandoned the program in 1969, but the program produced a great deal of technological development, and three groups of military officers trained to be MOL astronauts.

The spacesuit with identifying number 008 had the name "LAWYER" on the left sleeve. The suit was traced to Lt. Col. Richard E. Lawyer, a member of the first group recruited to be MOL astronauts in 1965. Records show that official ownership of this suit was transferred by NASA to the Smithsonian Institution in 1983. The suit itself has now been returned to the Smithsonian.

No records were found for the other suit, with the intriguing identifying number 007. It still belongs to NASA, and the agency's plans for the suit are still being determined.

The MOL program left other legacies to NASA, as well. When the program was cancelled, seven of the younger astronauts were transferred to the agency's human space flight program and went on to have standout careers. Among them were Robert Crippen, pilot of the first Space Shuttle mission, and Richard H. "Dick" Truly, who later became NASA Administrator.