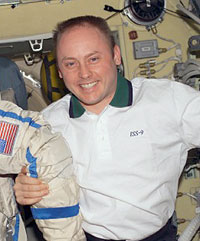 Although Fincke is among thousands of American fathers whose service to the country has prevented them from attending the birth of a child, he is the first U.S. astronaut to have celebrated the event from space.

"Her name is Tarali Paulina and Tara is the Indian dialect meaning star," Fincke radioed to Mission Control, Houston, shortly after the birth. "Our first boy, his name is Chandra, which means moon. So, my wife had already given me the moon, and now she's given me a star and it's a privilege to happen aboard the International Space Station."

Fincke, NASA Station Science Officer, and Commander Gennady Padalka were launched to the orbiting outpost April 18. They are in the midst of a six-month flight.

Shortly before her daughter was born, Renita Fincke talked to NASA Television about herself and her family. An engineer for Wyle Laboratories working at NASA's Johnson Space Center, she looks forward to helping her husband experience the first few months of their daughter's life with teleconferences, video and emails until his return to Earth in October.

"This is a wonderful, exciting adventure for both of us, and I've supported him all the way -- I support him every day," she said. "I hope that everything is successful for his mission, that he comes home safely, and that we get to enjoy many more adventures together for the rest of our lives."

In her interview, she also recounts how Mike Fincke has embraced her family in India and how he delighted in the experience of visiting them. They had two weddings, to honor both their families, when they married in 1999. They had a Catholic ceremony in the morning in Houston and a Hindu ceremony in the afternoon in Galveston, Texas.

"Mike came riding in on a white horse," she said. "That was really neat."